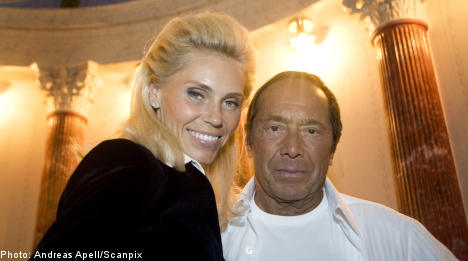 “In Sweden it is acceptable to let yourself go, as long as you get your man. I feel sorry for Swedish men who marry beautiful women who then quickly become unattractive, dress sloppily and neglect their husband’s needs,” Anna Anka writes on opinion website Newsmill.

Aside from claiming a “large fee” for taking part in the programme, Anka claims to have generated “a great deal of attention” in Sweden since the show was broadcast.

“It pleases me. Maybe I can be a role model for other Swedish women to follow,” she writes.

She continues to direct criticism at Sweden in general, and Swedish men in particular, hailing her adopted home of the USA as a place were “men are men, and women are women”.

“Swedish dads are tragic with all their nappy-changing and equality. A real American man panics if he is alone with a child for more than 20 minutes. American dads do not prepare dinner and do not iron, they work and provide for their families.”

In return for economic security provided by their husbands, wives in the US always act with consummate style, Anka claims.

“As a housewife you should support in every way, you should always be attractive and well-dressed.”

Anka has courted some attention for comments in the programme in which she confirms that she dutifully performs oral sex for her husband when he wakes in the morning.

“Sexually it is the woman’s responsibility to ensure that the man is satisfied, if she does not then she only has herself to blame if he is unfaithful,” Anna Anka explains.

The Skåne-born former beauty pageant queen then goes on to defend her treatment of “the long list” of those on her payroll and praises the US service-minded society.

“If you employ someone in Sweden they would have training and qualifications. Here it is illegal Mexicans that do the work…They can’t speak English. It is like talking to a wall. It can get frustrating at times.”

Anka claims that if Swedes would follow after the US and employ help then families would be under less pressure.

“What I am getting at is that in the USA it is all about service. If the Swedish people had learned from the USA then Swedes would have more time for each other. There is no quality time. Now they come home and sulk and have to clean and iron.”

The final salvo in Anna Anka’s Newsmill diatribe is reserved for what she dubs “the internet generation.”

“They are uneducated and envious, and their lives spent on blogs and Twitter are meaningless.”

Anka concludes by reiterating her hope that she can be a role model for Swedish women and encourages them to break away from “Jante land” (referring to the unwritten Jante Law which discourages delusions of grandeur).