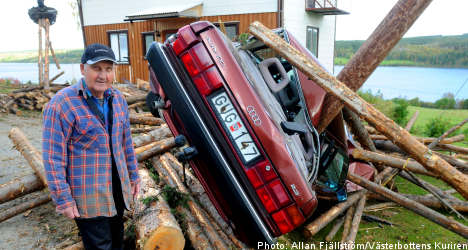 By now, Sigurdsson is familiar with the loud rumbling and violent shaking that occurs when a load of timber flies off one of the many trucks that round the bend on route 363 in front of his house in Örträsk, just south of Lycksele in north central Sweden.

On Thursday, Sigurdsson happened to be in his attic as another timber truck came around the turn, prompting a recognizable sound.

“I realized what was happening when things started rumbling and the house started shaking. All the doors were blocked by the logs so I had to wait for help,” Sigurdsson told the local Västerbottens Kuriren newspaper.

“It’s happened three times before. The first time was in 1989 and the second time the house really took a licking was about five years ago.”

The driver of the truck was caught off guard by the sharp turn, causing much of the cargo to fly off the trailer and into Sigurdsson’s house.

“Erold could have been killed. I was out near the road myself about 10 minutes before the accident. The Roads Administration (Vägverket) needs to do something about that curve,” neighbour Svante Axelsson told the newspaper.

The wayward timber tore Sigurdsson’s front porch off his house, put a hole through his front door, and broke eight windows. In addition, his car was pushed up against a utility pole, crushing the vehicles roof.

But Sigurdsson didn’t let the mishap dampen his spirits, joking about what might have happened had been outside when the truck came round the bend.

“Yeah, I would have probably ended up under the timber, or I would have had to run really fast. But I’m not exactly like that guy Usain Bolt,” he told the TT news agency.