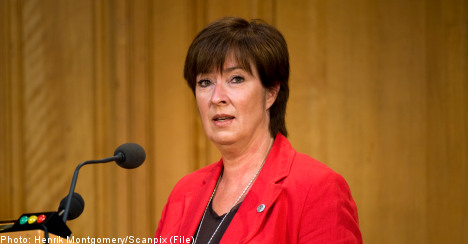 “It is remarkable that she is out of town just days before this election,” said Ulf Bjereld, a political science professor and an active Christian Social Democrat, to the Expressen newspaper.

Expressen featured photos of Sahlin boarding a specially chartered plane bound for Majorca along with other Swedish celebrities. The purpose of the trip was to celebrate party planner Micael Bindefeld’s 50th birthday at a luxury hotel in the village of Deia.

Sahlin’s spokeperson, Anna Hellsén, stressed that the party leader has paid for the trip herself.

But union leaders, historically strong supporters of the Social Democrats, are still fuming.

“It is totally reprehensible of her to do this kind of trip now. We are living in an economic crisis and this is very bad timing,” Harry Rantakyrkö, chairman of the Kiruna branch of the Gruvs mine workers union, told the newspaper.

The controversial trip isn’t the first time Sahlin has come under fire for attending one of Bindefeld’s parties.

Ten years ago, she was invited to a Greek island to celebrate the 40th birthday of the party organizer, a prominent figure on Stockholm’s social scene.

“She should have avoided making this trip if she was criticized for a similar trip a decade ago when Bindefeld celebrated his 40th. It’s quite stupid of her given this background,” political scientist Olof Ruin told Expressen.