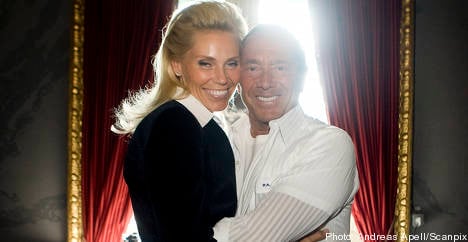 Göran Hägglund said on Friday that Anna Anka would not fit in well in the party, rescinding an apparent invitation from party secretary Lennart Sjögren earlier this week.

Anka is married to American singer Paul Anka and currently features in docusoap Svenska Hollywoodfruar (‘Swedish Hollywood Wives’). In an article on opinion site Newsmill earlier this week, she said she felt sorry for Swedish men who marry beautiful women. The women, she said, later let themselves go and neglected their husbands’ needs.

Anka also said: “Sexually it is the woman’s responsibility to ensure that the man is satisfied, if she does not then she only has herself to blame if he is unfaithful.”

When Anka then expressed a wish to get involved in the Christian Democrats, Sjögren told newspaper Expressen that “all who share our values – that everyone is of equal worth and about the importance of the family – are welcomed by us. Ours is a broad party.”

Sjögren’s comments provoked a furious response from the party’s women’s movement. The movement’s chairwoman Maria Fälth said in a statement that Anka’s values were not compatible with Christian Democrat ideology.

“The role of women should not be reduced to being men’s accessories,” she said.

Speaking to news agency TT on Friday, Sjögren withdrew his welcome to Anka.

“It was a bit hasty. I hadn’t read Anna Anka’s article on Newsmill. With her view of humanity and her values I don’t think she’d fit in with the Christian Democrats.”

Hägglund has in recent months made repeated attacks on a left-liberal “opinion-forming elite”, which in his view wants to decide what people are allowed think. But on Friday he said he wasn’t impressed by Anna Anka’s views.

“Everyone is welcome to apply for membership of the Christian Democrats, but what little I have read and seen about Anna Anka as a person hardly makes me think that she has values that would make her feel at home with us,” he said.