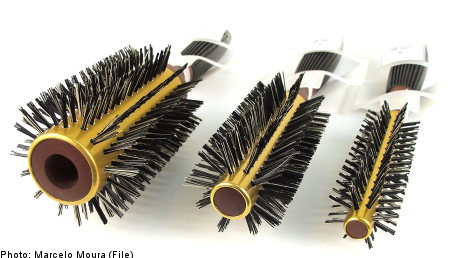 The drug-stuffed hairbrushes may have looked like these ones

The drugs were stuffed in hollow hairbrushes, according to the Aftonbladet newspaper, citing a report from the Brazilian newspaper Tribuna do Norte.

As the woman made her way through a security checkpoint at the airport in Natal in northern Brazil, authorities noticed she was carrying a number of hairbrushes in her bags.

Upon closer examination, the brushes were found to be hollowed out and filled with cocaine.

All told, authorities found 2.36 kilogrammes of the drug stuffed in 26 brushes and 31 hammers.

The woman claims that she didn’t know there were drugs in her bags.

A spokesperson with the Swedish foreign ministry confirmed that a Swedish woman in her twenties had been arrested in Brazil.

The 22-year-old Swede faces up to 15 years in prison if convicted.