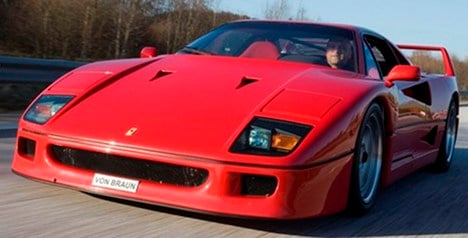 The Ferrari F40 had been recently imported into Sweden by Von Braun Sports Cars in Skene in southern Sweden and was duly subjected to a routine registration inspection in nearby Kinna on Thursday.

But when the state-owned Swedish Motor Vehicle Inspection Company (Bilprovningen) driver sat behind the wheel of the powerful Italian sports car something went seriously awry and the vehicle lurched into a fence in the test area.

“It is not an easy vehicle to handle, if you are not used to it. A thoroughbred you could say,” Torbjörn von Braun, CEO of Von Braun Sports Cars, told The Local on Friday.

The red Ferrari sustained damage to its front end in the crash which left the driver shaken from his experience.

“I spoke to him yesterday and he wasn’t feeling too good about it, I don’t think he would have slept much last night,” von Braun told The Local.

Thorbjörn von Braun told The Local that the issue of reponsibility had not yet been established.

“It is an issue for our insurance company.”

While the vehicle is a rare “collector’s item” von Braun explained that the damage is repairable and the car would be back on the road before long.

“Had it been performing on a race track they would have had the body part ready and replaced within 20 minutes. It is expensive, but can be repaired,” he told The Local.