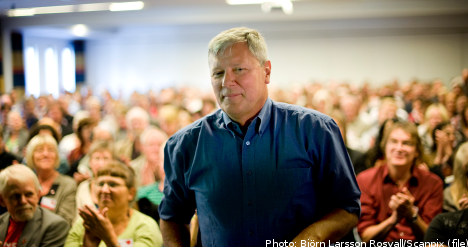 Ohly argues that it is time for the Left Party to fall in line with its coalition partners, the Social Democrats and the Green Party, and accept Sweden’s place in the European Union, according to an interview on Sveriges Radio’s Ekot news programme on Saturday.

“The existence of the demand for withdrawal from the EU makes it easier for us to be pushed aside. Why retain…a line of policy that we can not anyway in practice demand?” Ohly said.

Ohly underlined that the Left Party has anyway long respected the referendum that was held on the issue before Sweden’s entry into the EU in 1995.

He also added that there are some positive aspects of EU membership and that the union could be effective, for example, in the fight against climate change.

The Left Party, the last bastion of parliamentary opposition to the EU, are thus set to join the Green Party which removed a demand for Swedish withdrawal from the EU from its party platform in October 2008.

“It is sad and remarkable in view of the way the EU is currently heading,” Lars Ohly said at the time.

The new policy is not the only area where the Left Party has indicated a new flexible approach to negotiations with its coalition partners, with Ohly also telling Ekot that the party is prepared to accept some of the income tax cuts introduced by the current Alliance government.