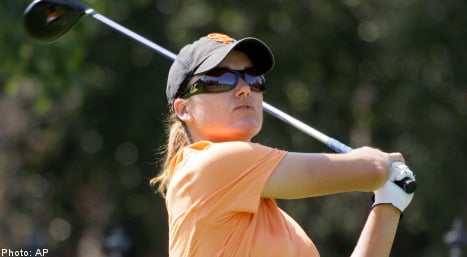 The 35-year-old Swede triumphed for the first time since the 2003 Samsung World Championship, and admitted that she was starting to wonder if she’d ever add another title to her resume.

When it did come, Gustafson made it look easy as she cruised to a four-shot victory over world number one Lorena Ochoa of Mexico.

Gustafson carded a four-under par 68 for a 20-under total of 268 and her fifth LPGA trophy.

She was grinning as she crossed the bridge to the 18th green, and once the win was in the bag she hugged caddie Tamara Hyett.

Gustafson’s final round was highlighted by an eagle at the fifth, while Ochoa, vying for her third title of the season but her first since April, struggled all day.

“I thought maybe the back nine was mine,” said Ochoa, whose last victory came at the Corona championship in Mexico. “I gave myself birdie chances on 10, 12, 13 and 14 and none of them dropped. I would have had some momentum and put some pressure on Sophie.”

Ochoa, who won 21 times in the previous three seasons, said she just had to stay patient in her current dry spell.

“For sure I didn’t play my best today,” she said. “I didn’t get a good start. Everything looked like it was her day. I’m trying to be happy with second place. I have to be patient with myself.”

Gustafson admitted she was relieved her own dry spell was over.

“I’m just happy it’s over,” she said. “I have felt good but I haven’t gotten it done.

One thing Gustafson wasn’t worrying about was Ochoa.

“I’m so wrapped up in my own game if I start paying attention to what other people are doing I start going straight downhill,” she said.