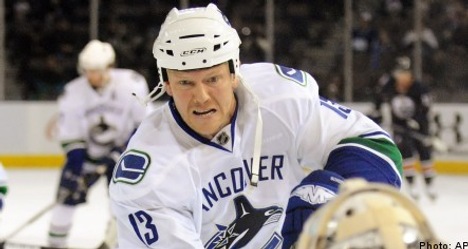 “It feels good, it comes from the heart,” Sundin told reporters.

“I’ve had a long carrier and have played since I was a child. It’s hard to summarize everything but it’s been a great journey…I couldn’t have had a better life than the one I’ve had.”

Sundin was composed and in good spirits as he told the Swedish press that his 18-year-career in the National Hockey League (NHL) was over.

He cited physical fatigue as one of the reasons for his decision.

“I’ve begun to feel that it’s quite nice to sit on the sidelines and not play a match every day, and that’s why I feel this is the right decision. My body isn’t up to the every day wear-and-tear of the NHL anymore,” he said.

Sundin made his professional debut in Sweden in 1988 with Nacka HK, before moving to Djurgården of Sweden’s elite league for the 1989-90 season, and then on to the NHL’s Quebec Nordiques in 1991.

The sharp-shooting Swede went on to have one of the most successful NHL careers of any Swedish hockey player in history.

Despite his stellar career, most of which was spent with the Toronto Maple Leafs, Sundin never managed to win a Stanley Cup championship.

“A Stanley Cup ring would’ve been nice to have but in all honesty I’ve experienced and won so much since I landed in Quebec as a 19-year-old. It feels like I’ve experienced so much more than I could ever have imagined,” he said.

“I really got to fulfill all my childhood dreams.”

He notched 420 goals and 987 points during that span and spent 10 years as the team’s captain.

He became free agent following the 2007-2008 season, and finally signed with the Vancouver Canucks on December 18th for what turned out to be his last season in the NHL.