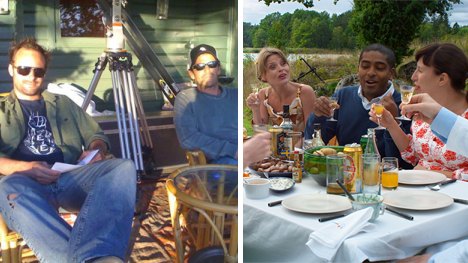 Although the romantic comedy “Äntligen Midsommar”, has a decidedly Swedish title, the director and producer both hail from the other side of the Atlantic.

So how exactly did this team of Americans end up in the idyllic Swedish town of Trosa making a movie about one of the quintessential Swedish holidays?

The Local sat down recently with American director Ian McCrudden and American producer Schif Musarra to learn more about how they went about capturing the spirit of Midsummer and all unpredictability that comes with it.

The Local: How come you chose to shoot a movie in Sweden?

Ian McCrudden: Well, I think I’ve got an easy explanation for this. My wife is Swedish…and we have got this strong group of friends who are all actors. Anyways, one day our friend came up to me with this script and I had a look at it and I thought it’s definitely doable. Yeah, and then one thing led to another and here we are sitting today.

Schif Musarra: Well, my wife is Swedish and we’ve got two kids. Ian and I met through our wives a few years back. As he mentioned, we’ve got this close group of friends in Sweden who fortunately happen to all be actors. And when I read the script the idea of shooting a movie over here seemed pretty viable to me.

TL: Why did you pick Midsummer as the main theme of the movie?

McCrudden & Musarra: We both think it’s a very unique holiday. Family and friends gather to celebrate this traditional day where friendship and relationship values are what matters. It kind of feels like it’s the day for re-evaluating your life.

As outsiders, it’s easy to observe that Swedes are very reserved, but on holidays they actually manage to let loose and break with typical Swede behaviour. We like Sweden best during summer and especially during Midsummer; people are more fun!

And Sweden is the only country that celebrates this unique holiday and it sort of matches our funny concept. Come to think it, the first time we met was at Midsummer celebration in New York City.

TL: How did you manage to get Luke Perry to star in a Swedish movie?

McCrudden: It wasn’t as tricky as people might think. Once the script is done it goes out with the director’s name. Luke’s manager read the script and he came up to us and told us that he liked it and said Luke is the guy you’re looking for. And then one thing lead to another and this is how it happened. Sweden went fucking gaga about it, casting someone that was a former TV-star and all.

Anyways, Luke and I hit it off and had no problem working with each other. Luke took it all pretty easy for the short time he worked with the people over here. He had no problems adapting to the group. It all happened pretty fast once we had the chat.

TL: Was it different to shoot a movie Sweden compared to the United States?

McCrudden: It wasn’t that different since I had my American crew over here. All I can say is that the spirit of the crew was great. Well the only thing I could mention, though, is that back home we do work a bit faster than over here.

Musarra: What I’ve noticed is that the Swedes are used to command and they were pleasantly surprised how laid back and relaxed we work. We were open for suggestions and ideas. It was a fun set to work on and that kept us going.

TL: Did the movie meet your expectations?

McCrudden: From an artistic level I can say that it definitely worked. And now I’ve have seen it play in front of an audience and I can proudly say that they loved it. I have to say that it all depends on the marketing of the movie.

Musarra: I have to say that it exceeded my expectations. The work we put into it can be seen on the screen. It’s a lot better that I thought it would be. Certain relationships in the movie are very comical but when things move along people start to see things on a deeper level. Even people at home enjoyed it – we’ve got the Swedish thing, you know. So it’s been great so far.

TL: Which is your favourite scene in the movie?

McCrudden: A scene I like a lot is the one with Emil (Daniel Gustavsson) in which he ends up on the cliffs with Eva (Anna Littorin). They basically end up singing a song from back in the day. It’s a song that both feel connected to. They fall into each others arms and know that it’s meant to be, but their official partners are still there waiting for them. Originally this scene was written in a different way. The actors actually suggested that we do it a different way – so the script kept getting re-written on the fly. They managed to change the scene into something magical though – the kiss on the rocks.

Musarra: My favourite scene is actually a very fun. Anders (Olle Sarri) and his wife Maria, (Annica Bejhed) are trying to have a baby, but during all these innumerable attempts he never told his wife that he’s actually shooting blanks. So he goes up to Emil and asks him for a sperm donation. It’s so funny – you’ve got to see it for yourself.

TL: What is the best and worst experience you had in Sweden?

McCrudden: The best thing was marrying my wife, Annica Bejhed, and the worst thing that ever happened to me was my bachelor party. My friend got me into this boxing ring and when I got there I was facing this beefy Armenian guy who could have no doubt killed me. The only thing my opponent said was: “I will box up to the third round” and I think you can guess how it ended – a sort of horrible, yet funny nightmare.

Musarra: The best thing that ever happened to me was the birth of my now three-year-old son. I was so lost when I moved here and he gave me the comfort and the strength I needed to find myself. The worst experience I had was when I was teaching corporate language classes. Man, I was so not fit for that world. The worst part was that I had to pretend I knew what I was talking about.

TL: Do you think you will be doing any more movies in Sweden?

McCrudden & Musarra: Yes, we will. As a matter of fact we just started our own company called “Stockholm California”. We set up this company for co-productions between Sweden and United States. We’ve actually got some other things going on already.

One project is a TV-show “SFI – Swedish for immigrants”, a sort of Romeo and Juliet style story about immigrants in Sweden falling in love. And yes, much of the story plays out in their SFI language classroom.

Another is a movie with the Swedish actor Peter Stormare called “Cuba Libre”, a hip-thriller about a kid who gets caught in the Cuban-American underworld.

So yeah, things are rolling.

Check out The Local on Thursday for an exclusive interview with Luke Perry in which he discusses what he learned about Swedish women while shooting “Äntligen Midsommar”.