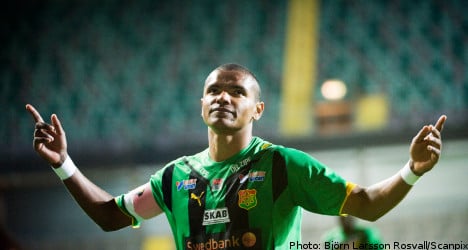 The football authorities are now considering whether to penalize the club while the Migration Board (Migrationsverket) has reported Wanderson to the police over the issue.

”It’s a routine measure. It is a crime to work in Sweden in without a permit,” Johan Rahm at the board told the Dagens Nyheter newspaper.

When details of the absent permit came to light in the Swedish media earlier this week, fellow Allsvenskan clubs Hammarby and Örebro submitted protests to the Swedish Football Association.

Wanderson’s permit ran out on July 27th and was renewed on September 17th. Since then he has played three league games, the latest against Örebro on Monday, in which he scored two goals in a 3-0 win.

In a further twist to the tale, the Migration Board announced late on Thursday that Wanderson’s new application had been successfully processed and has been validated from the day of his application.

But confusion remains over whether he had qualified status to play or not during those last three games.

”It’s only matches in the last two weeks that we can take into account,” Khennet Tallinger, FA disciplinary board chief, told the Aftonbladet newspaper.

The disciplinary board is thus unable to take action against any matches played in August or early September.

According to Swedish Football Association rules, a protest over an unqualified player must be lodged no more than five days after a match. The game against Örebro stands but the protest made by Hammarby, regarding a match played on September 23rd, cannot be processed.

Wanderson had the right to be in Sweden but a ban against him working can still disqualify him and make Gais answerable to disciplinary action, which could result in a fine or points reduction.

”If the Migration Board says he cannot work during that time, he would not be qualified to play,” Tallinger said.

”We have requested a statement from both Gais and the Migration Board. At the moment I can’t say what is right or wrong.”