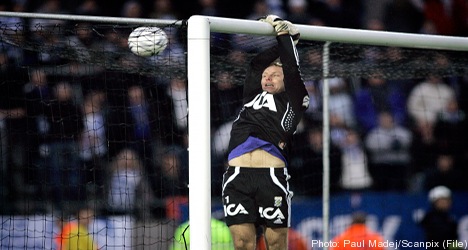 The decision was announced on Friday by the Swedish Football Federation (SVFF).

“The referee did not note any fault and the incident would have merited a yellow card but not a red one,” SVFF disciplinary commission president Staffan Anderberg said in a statement.

”For that reason the disciplinary commission did not impose any subsequent sanction.”

In a match against Örebro in September, Kim Christensen, a Dane, was spotted kicking the moveable goalposts, an action that resulted in them moving several centimetres inwards.

The referee was alerted after 30 minutes of the match by Örebro players and Christensen, 30, admitted that it had not been the first time he had moved the goalposts in such a way.

“I saw a friendly goalkeeper doing it some years back and since then I’ve done it from time to time,” he said.

Following the announcement a relieved Christensen said the attention he has made him rethink his actions.

”I think it’s the right decision,” he told newspaper Dagens Nyheter. ”But it’s good that it’s been brought to light and I won’t do it again.”

Gothenburg are currently second in the Swedish Championship, three points behind Stockholm club AIK, with five games left this season.