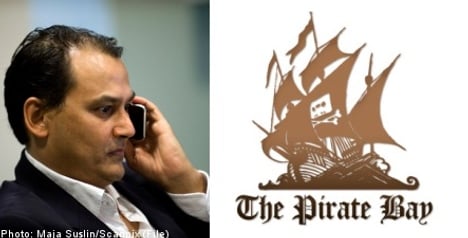 “At present, GGF cannot discern whether the acquisition will be completed regardless of the outcome of the trial,” the company said in a statement.

Over the summer, GGF announced plans to purchase The Pirate Bay for 60 million kronor ($8.5 million).

But last week, GGF’s letter of intent agreement with The Pirate Bay expired without any sign that the deal was closer to completion, marking another in a long string of setbacks which has plagued the purchase ever since it was announced.

Doubts about the deal began to emerge shortly after it was announced when GGF CEO Hans Pandeya was unable to demonstrate he had the funds in place to purchase the popular file sharing site.

In August, trading in GGF shares on the Aktietorget exchange was halted after the company failed to show that investors or funding were in place. The company was later booted from the exchange altogether.

But even as the fortunes of GGF appeared to be heading south, Pandeya continued to issue upbeat public pronouncements claiming that the company’s purchase of The Pirate Bay was on schedule.

“Nothing can stop it,” he said on August 27th, telling the AFP news agency that the deal would be done within days

As late as September 10th, the day GGF was kicked off the stock exchange, Pandeya continued to project confidence.

“This doesn’t affect the purchase at all,” Pandeya told the Svenska Dagbladet (SvD) newspaper of the Aktietorget decision.

But Wednesday’s announcement carried a different tone, citing the pending bankruptcy claim as one of the factors that may ultimately scuttle the deal.

“The acquisition process stalled because of a bankruptcy filing against GGF and despite several attempts by GGF to clarify the situation uncertainty remains,” said the company.

A hearing on the creditor’s request to have GGF declared bankrupt is scheduled for November.

Around the same time, another court is expected to hear the appeal of the guilty verdict issued against the four men behind The Pirate Bay in April.