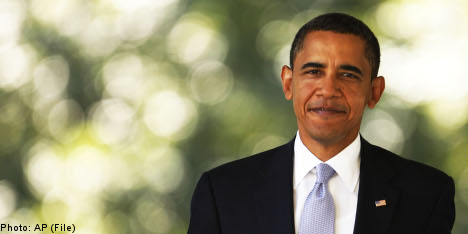 “The choice of Barack Obama as the recipient of the world’s foremost peace prize is shocking,” said the group’s chairwoman Anna Ek in a statement.

Ek conceded that the US president had sent “positive signals” with regard to his future commitment to global peace.

“But at the same time Obama is the president of the biggest military power in the world and is waging two wars in the world. That should certainly disqualify him from a peace prize,” said Ek.

The leader of the Swedish opposition, Social Democrat Mona Sahlin, said the prize award would serve to increase expectations that Obama can deliver concrete results.

“It’s a pleasing political turnaround from the years with George W Bush, who disregarded the UN’s rules and regulations,” she said in a statement.

Moderate Party parliamentary group leader Lars Lindblad said that, though he was glad Obama had been elected president of the United States, awarding him the Nobel Peace Prize was a “historic mistake”.

“In my view the Peace Prize should go to somebody who has achieved something,” he told Dagens Nyheter.

Social Democrat foreign policy spokesman Urban Ahlin confessed to being caught off guard by the award.

“I was quite surprised I have to say. The efforts Barack Obama has made for peace do not currently correspond to a peace prize,” he told news agency TT.

Ahlin noted that while Obama has mapped out an exit strategy for Iraq, fighting still continues. War also continues to rage in Afghanistan; the Guantanamo Bay detention facility remains operative; and the president’s Middle East initiative has not yet borne fruit.

“I’d like to have seen Obama get the peace prize in a few years when he can show the results of his efforts. Now is too early,” he added.