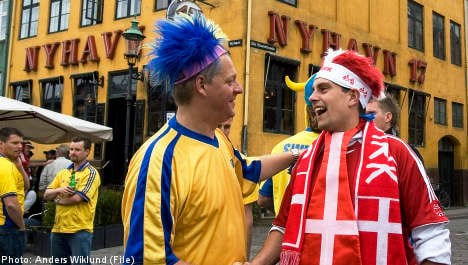 Swedish coach Lars Lagerbäck was upbeat at a press conference on Thursday where he emphasised the confidence that his players were feeling ahead of the clash with their Danish rivals.

“We are going in with the attitude that we own Parken, and we shall be brave in all that we do,” Lagerbäck said, recalling the previous away match against Denmark in 2007 when the team scored three goals in a majestic first 25 minutes.

The match swung back in Denmark’s favour after registering three goals of their own, only for the game to end in fiasco for the home side as a drunk Danish supporter entered the field of play and assaulted the referee.

The match was abandoned and Sweden were awarded a vital three points that helped see them qualify for the Euro 2008 tournament in Austria-Switzerland.

A win in Copenhagen on Saturday would leave Sweden and Denmark at the top of their group on 18 points.

Denmark’s vastly superior goal difference would however probably leave the Swedes reliant on a slip up in the final round of games on Wednesday to avoid a play off.

The match signals the return of Henrik Larsson to the team. The former Celtic star has shown good form with Helsingborg since returning from injury in September and will be hoping to claim a spot alongside Barcelona striker Zlatan Ibrahimovic in the Swedish attack.

Trailing by the three points and five goals going into the game Sweden will be hoping that the partnership will produce the goals to boost a World Cup campaign that looked a forlorn cause after losing to the Danes in Solna in June.

The Swedes will otherwise be able to field a full strength team after confirmation that Bolton forward Johan Elmander will recover in time for the match.

Lagerbäck spoke of four cup finals as the autumn round of international matches began away in Budapest in September. With a good deal of fortune, added to the industry expected of a Swedish outfit, the team have come halfway – on Saturday evening the nation expects.

“The majority of these players are winners so there is no problem, there,” Lagerbäck said in response to a question asking how he would go about motivating the team for the challenge.

Elsewhere in group 1 Portugal will be hoping to keep their hopes of reaching South Africa alive in a must win match against Hungary in Lisbon.

Hungary meanwhile have seen their early promise in the group fade away and will be hoping to upset Christiano Ronaldo and the much favoured, but goal-shy, Portuguese.