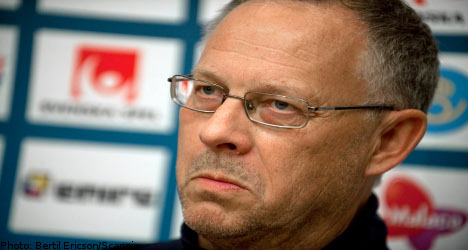 Sweden lost 1-0 in Denmark on Saturday night and with Portugal beating Hungary 3-0 face elimination from Group One.

Lowly Malta would need to win or draw in Lisbon on Wednesday and Sweden to beat Albania by a large margin to see Lagerbäck’s side reach the play-offs.

Long-serving Lagerbäck told a press conference that he and his deputy Roland Andersson would resign “whatever the result … either after the World Cup in South Africa, or after a play-off or after the Albania match,” on Wednesday.

Sweden have failed to even score in qualifiers against main rivals Denmark and Portugal and Lagerbäck, who has coached the national side since 2000, has come under increasing fire despite managing to guide the team to the last five major football championships.

Among Lagerbäck’s potential successors has been named former England and Manchester City coach Sven-Göran Eriksson as well as his former assistant Hans Backe.

Former European champions Denmark secured automatic qualification for the 2010 finals after downing Sweden in Copenhagen. Sweden have 15 points, behind Portugal on 16.

Only group winners secure automatic qualification for the finals in South Africa next year, with the eight best group runners-up being forced into a two-leg play-off.