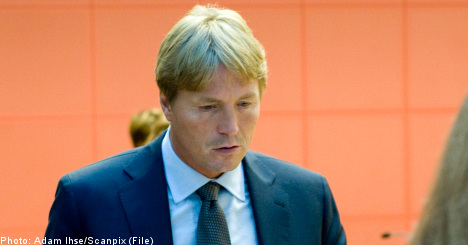 Bodström, who chairs the Riksdag’s justice committee, has previously said that his responsibilities as a member of Sweden’s parliament come first, but that he has had a number of absences from the chamber when votes took place.

According to Bodström, his absences have been primarily due to “work for the party” rather than his work as a trial attorney.

But according to TV4’s investigative news programme Kalla Fakta, which compared Bodström’s Riksdag absences with the legal invoices he filed with a number of courts around the country, nearly half of the former justice minister’s recent absences were due to trial-related work.

During the spring of 2009, Bodström missed 19 out of 36 votes in the Riksdag, and 10 of those 19 absences were for work related to his second job as a trial attorney, through which he earns tens of thousands of kronor of side income in addition to his Riksdag salary.

Bodström’s 53 percent voting presence gives him one of the 10 worst attendance records of the Riksdag’s 349 members.

In general, only party leaders and parliamentary group leaders have a worse attendance record, according to Kalla Fakta.

Furthermore, missing Riksdag votes in favour of a higher paying side job violates the Social Democrats’ own rules, which state that “Missing votes can only occur in exceptional cases”.

“Acceptable reasons for absence are political participation in outside events deemed to be more politically important for the party than presence in the Riksdag,” according to Kalla FaKta.

Bodström countered that he has been more active than the average member in posing questions to ministers, submitting written questions, and during committee meeting sessions.

“But there are also other activities that put pressure on people. Bodström is very sought-after all around the country for meetings and other things, not only for the things Kalla Fakta dug up,” he said.

Österberg said that nothing mentioned in Kalla Fakta was news to him, adding that he doesn’t think Bodström has broken the party’s rules about absence from Riksdag votes.

Moreover, while the rules should apply equally to everyone, Österberg added that Bodström’s vast contact network needed to be considered as well.