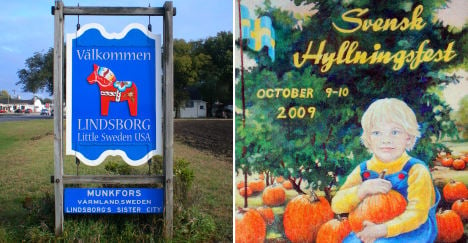 Okay, so Kansas isn’t New York—even if there is a Manhattan in Kansas. Does every holiday have to be to an urbane metropolis or chic resort? When people asked me where I was going next, their response to mine was “Kansas?! What’s in Kansas?” My answer to this question, in turn, was gauged carefully, depending on the level of shock betrayed by questioner’s face: no eyebrows raised meant genuine interest, one eyebrow raised conveyed “Convince me”. Someone with both eyebrows raised was not even hearing me speak; I had to wait for the horror and disbelief to subside before reciting the long list of activities and attractions on my itinerary.

The main focus of my visit to The Sunflower State is… curiously Swedish. As Swedes tended to do when they left the fatherland, they sought places exactly the same as the cold country from which they departed, forsaking majestic mountains and tropical paradises for fertile soil in order to recreate the place they had just left. In Lindsborg, the hot water from the tap runs scalding, just like at home.

The town of Lindsborg is known as Little Sweden USA. It was settled by Swedish immigrants way back in the late 1800s and has been making meatballs ever since. This is no ersatz playland imitation of Sverige; as with everything and everyone else in the fine state of Kansas, it is genuine. The Lindsborg community library is stocked with Swedish books; the local college team is known as The Swedes. Its signs are in Swedish as well as English, and hearing Swedish spoken in the street is an everyday occurrence, even if only spoken by a refined elderly gentleman talking to himself in a quaint version his mother tongue so old that no one from Ystad to Haparanda would today have any idea what he is saying.

Many Swedes have relatives here and don’t even know it. At a time when the Lutheran Church controlled the lives of Swedes, emigrants who grew tired of awaiting approval from their pastors to leave the parish were simply expunged from local records as if they never existed. In order to assist Swedes investigating their ancestry, Lindsborg today has access to the most detailed genealogy records in the United States.

So, what is this place almost in the geographical centre of the continental United States? First and foremost, Lindsborg is a town where good people work hard and look after each other—and while it seems very conservative on the outside thanks to the bombardment of media stories telling us that all residents of rural America are redneck white supremacists who eat bullets for breakfast, the truth is somewhat less threatening. In fact, the truth is downright welcoming as an antidote to what we urban dwellers call civilisation. While such big-city creations as liability insurance and government bureaucracy have insinuated themselves into life everywhere, others such as abject poverty, homeless people, and heroin addiction are nowhere to be seen; taking their place are friendliness, helpfulness, and a sense of community that pervades every aspect of life.

Education has been a cornerstone of Lindsborg life since its founding in 1869, with the arts and athletics also encouraged in making the youth of Lindsborg into well-rounded citizens. This explains why Lindsborg children grow up to be doctors and lawyers who sing in the Swedish choir and why shop owners are also tennis champions when not tutoring students or making ostkaka.

Lindsborg is home to the biannual Svensk Hyllningsfest, a celebration of Swedish heritage which takes place in odd-numbered years. Don’t expect crowds the likes of Berlin’s Love Parade; after all, Lindsborg is a small town. What makes a deep impression is the community commitment and sheer enjoyment of efforts to make the festival a success. That other denizen of big cities—apathy—has no place in Lindsborg, where everyone participates in one way or another. From toddlers to seniors, almost everyone owns traditional Swedish clothing and is SO PROUD to wear it. Lindsborg adolescents, rather than scoffing at the past, fight for the privilege to dance in the folkdans group.

Swedish immigrants are still coming to Lindsborg. Like many a Kansan who moved elsewhere for professional or personal reasons, only to come back to enjoy the high quality of life here, Swedish people seeking a better life—just like the original founders—are still making their way to Lindsborg. Tom, owner of a clog factory in Dalarna, opened a small production facility in Lindsborg; Lindsborg’s Bethany College hosts visiting professors from Sweden, and there are a few Swedish spouses around town. If SAS is looking for a profitable route, the Stockholm-Lindsborg run would make a good one, what with all the traffic coming and going between Big Sweden and Little Sweden.

It seems the amber waves of grain found across the state of Kansas beckoned to many Europeans fleeing the Old World for new lives across the Atlantic. The town of Wilson is Czech; many other towns are German. McPherson, just south of Lindsborg, celebrates its Scottish Festival every September just two weeks before Lindsborg’s Svensk Hyllningsfest. Despite its Scottish name and celebration, McPherson is also proud of its Swedish heritage, the crowning glory of which is the painting of one Gustav Nathaniel Malm, whose work adorns the proscenium of the soon to be reopened McPherson Opera House.

The time between the Scottish Festival and Svensk Hyllningsfest creates the perfect window of opportunity to explore other Kansas attractions like Lucas, a friendly little town where quirky artists have built oddities such as the surreal Deeble House and the amazing Garden Of Eden, which looks simplistic but is full of political symbolism railing against the injustices of the day—curiously similar to the ones still thriving today. The humour is drier than the climate in Lucas, so Swedes fit right in. Cottonwood Falls and the Flint Hills are home to tallgrass prairieland that goes on for miles, changing colours with the seasons. The sight of bison at the Tallgrass Prairie National Preserve is certainly something not seen in Europe.

If you fly into Kansas City, make a stop in Williamsburg en route to Lindsborg to enjoy some good Kansas cooking. So delicious are the barbecued ribs at Guy and Mae’s Tavern in Williamsburg that they make the front page of the local Ottawa Herald every day. True, there is a sturdy piece of aluminum foil between the ribs and the paper, but pork grease has a way of permeating even the most impervious of materials—much like the vision of a certain Krypton-born, Kansas-bred superhero—so the paper plays an important purpose in its role more absorbing than any ever portrayed by Liv Ullmann.

There is something fabulously primeval about eating meat with your hands; no utensils are presented with these ribs from heaven served in what is officially known as Guy and Mae’s Bare Butt Bar-B-Que. Observing the fully clad staff, I asked where the bare butts were. Without missing a beat, owner Judy told me “In the kitchen” so I just HAD to go see for myself. I wasn’t disappointed. Thankfully, though, the only butts on display were of the inanimate type—and I’ll leave it at that. If you’re wondering why Judy and her sister Diana are running a tavern called Guy and Mae’s, it’s because they took over a thriving business founded by their parents in 1974. Not a thing has been done to the place since, making the step into the premises a step into a timewarp of friendly welcome and sincere hospitality.

What does all this rurality mean? Come find out for yourself; it will do your cynicism a world of good. Kansas is the perfect destination for the quintessential American roadtrip with a Swedish twist. Lindsborg, and Kansas, make for a surprisingly transformational experience. I expected transformation in India, and Ethiopia has had a surprisingly permanent impact on my soul. Kansas, though, came as nothing short of a shock; never did I expect to find so many open-minded people, so much goodwill toward visitors, or so much cloudberry jam in rural America.