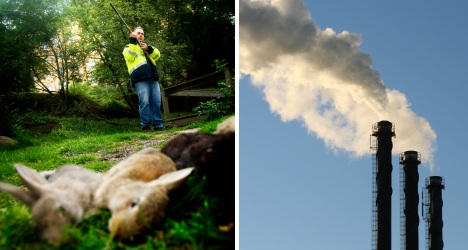 The decision to use Stockholm’s rabbit cadavers as bioenergy to warm Swedes living in Värmland doesn’t sit well with Stockholm-based animal rights activists.

“Those who support the culling of rabbits surely think it’s good to use the bodies for a good cause. But it feels like they’re trying to turn the animals into an industry rather than look at the main problem,” Anna Johannesson of Vilda kaniners värn (‘Society for the Protection of Wild Rabbits’) told the local Vårt Kungsholmen newspaper.

Every year, the city of Stockholm kills off thousands of rabbits in an effort to protect trees and shrubbery in the city’s extensive network of parks and green space.

According to Tommy Tuvunger with the Stockholm Traffic Office, the agency responsible for controlling the city’s rodent and wild animal population, part of the problem rests with delinquent pet owners who decide to release their rabbits into the city’s parks.

“Many of the released rabbits are tame,” he told the newspaper.

Animal control authorities employ a special rifle to shoot the excess rabbits, with most of the culling taking place at dawn when the animals peek out from their holes.

The city usually steps up its rabbit hunting efforts in the autumn as leaves begin to fall from bushes and trees, making it easier to see the rabbits.

Tuvunger explained that it doesn’t take many newly released rabbits to do what rabbits are known for doing, much to the detriment of Stockholm’s efforts to control the size of its rabbit population.

“People who think that the bunnies are cute and cuddly suddenly don’t think they’re as fun anymore and put the animals outside. They think: ‘there they can play with the other rabbits’,” he said.

But rather than simply disposing of the dead rabbits, the city instead froze them for eventual transport to a special heating plant in Karlskoga in central Sweden, where the bunny bodies are then burned as a form of bioenergy.

According to Johannesson, Sweden’s animal control authorities aren’t interested in pursuing other options besides killing the rabbits.

“We want to see them start looking at other solutions for the rabbits,” she said, citing the Finnish capital of Helsinki, which employs sprays to make park plants unappetizing as well as a network of shelters for various domesticated animals.

“In Helsinki, where they have the same problem, they’ve come much farther,” Johannesson told Vårt Kungsholmen.