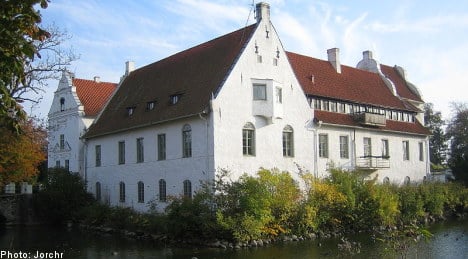 Dybäck Castle, situated near Skurup, is Sweden’s southernmost manor house and consists of a series of buildings dating from the 15th, 16th, and 17th centuries.

The main building boasts 26 rooms, a moat, and is situated near a tree-lined park and 500 hectares of farmland.

The estate belongs to Claes Ebbe Alwén, whose family has owned Dybäck since 1921, but who has been plagued by financial troubles due in part to sloppy bookkeeping related to his work as a secret agent for the Swedish military.

The Swedish Enforcement Agency (Kronofogden), the body administering the auction, expects to raise at least 100 million kronor ($14.2 million) through the sale of Dybäck, where Alwén entertained the Swedish military’s top brass with elegant dinners and hunting outings in the early 1990s in an effort to woo his eventual paymasters.

At the time, the Swedish Defence Materiel Administration (FMV) was looking for a way to acquire secret military technology from Russia.

In the wake of the collapse of the Soviet Union, there was no shortage of military equipment for sale, or Russian officials interested in making some money on the side.

With 20 years of experience buying and selling feed, fertilizer, and horses in Russia, Alwén had an extensive network of business contacts, making him a perfect candidate for FMV’s mission.

For eight years, Alwén used his fertilizer business as a cover to hide the transactions carried out at the behest of FMV.

One of Alwén’s first deals was an attempted acquisition of a MIG-29 fighter jet.

While he managed to put the deal together through existing contacts, FMV balked at the price demanded by the Russian sellers and backed out before the purchase took place, according a 2003 report in the Dagens Nyheter (DN) newspaper.

Among the technologies acquired by Alwén was a classified radar system which FMV asked him to purchase from Russia in 1995.

The radar system acquired by Alwén was critical for testing the capabilities of Sweden’s JAS-39 fighter jet, which was still under development at the time.

The equipment was then smuggled into Sweden, reconstructed near an Air Force testing site in Linköping, and christened “Ebbe” in honour of the enterprising Swedish fertilizer merchant, according to DN.

It remains unclear whether the acquisition of the radar system violated Swedish or Russian laws. While Alwén has long claimed the deal was approved by authorities in both countries, he admits that bribes were paid to Russian agents along the way.

The transactions were carried out through Exico, a company run by Alwén which went bankrupt in 2002 with debts of more than 8 million kronor. According to reports in the Sydsvenskan newspaper, FMV paid the company more than 100 million kronor, 80 million of which was unaccounted for and is thought to have been used to pay bribes to various Russians in key positions.

Documents related to Alwén’s activities have been classified by both FMV and Sweden’s Inspectorate for Strategic Produces (ISP), which oversees trade in military technology, testifying to the sensitivity of the transactions.

As investigators began looking into the company’s books, more details about his secret work for FMV came to light, prompting more questions about just where the money had gone.

On at least one occasion, Alwén is said to have filled a shopping bag with dollars to hand over to Russian contacts at an airport, according to a 2003 report in the Ystads Allehanda newspaper.

In Exico’s books, there are transactions labeled “Russian expenses” and “payment to Vladimir”.

In July 2003, Alwén was sentenced to two and a half years in prison for aggravated fraud and tax crimes and ever since then Kronofogden has been working to recoup the disgraced estate owner’s debts.

“I started to carry out the liquidation back in 2003. Since then, debts have continued to pile up,” Lennart Nilsson of the Swedish Enforcement Agency (Kronofogden) told the Skånska Dagbladet newspaper.

The agency plans to auction off Dybäck in Malmö on November 11th in an effort to raise money to pay off the estimated 23 million kronor in debt owed by Alwén to Kronofogden.

The liquidation has dragged on for years in part because the estate was in the process of being split up, but the process was eventually halted by a December 2008 Supreme Court ruling, paving the way for Kronofogden to continue its work.