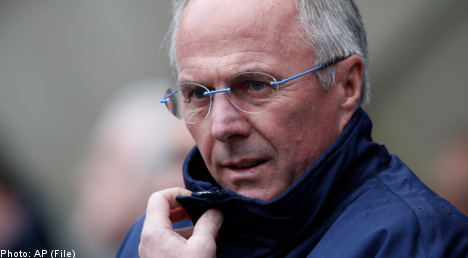 According to The Times, a close friend of Eriksson’s was able to confirm that the Swede had been approached but had decided to reject the offer.

“He has no plans to go out there. He was asked but he said no. I believe it was for a technical adviser’s role,” Eriksson’s friend told the newspaper.

Eriksson’s reported rejection of an offer from North Korea was bolstered by a Press Association reported published on Wednesday.

Eriksson, Notts County’s director of football, “was approached by the North Korean FA but Press Association Sport understands he has decided against taking up the offer,” the British news agency said.

The report came after The Guardian and other leading dailies said the 61-year-old Swede, who twice led England in the tournament during his five years as national manager, was to meet North Korean soccer chiefs in Beijing later this week.

Eriksson was to travel with the club’s executive chairman Peter Trembling.

However, Notts County chairman Peter Trembling denied the club had been approached.

“We wish to make it clear that Notts County have not received any approach nor had any discussions whatsoever with the North Korean FA in relation to Sven-Göran Eriksson becoming an interim manager of their national team,” Trembling said in a statement.

“It is correct that I am making a business trip to Asia but this is solely and exclusively on official Notts County business.

“I will be visiting Taiwan, China, Hong Kong and Thailand to discuss a range of Notts County initiatives linked to our 150th anniversary.”

The Guardian said Trembling had already been involved in talks with intermediaries representing the North’s football association about loaning Eriksson.

“The process is now advanced enough for Trembling and Eriksson to be travelling to Beijing later this week on an eight-day trip,” the paper said.

North Korea’s embassy in London suggested an announcement could be made in “two or three weeks,” it added.

North Korea has qualified for the final stages for the first time since 1966, but has struggled to score goals.

Eriksson was seen as a candidate to take over Sweden, who are unlikely to qualify for South Africa, but his home federation was reportedly not interested.

Having endured 10 turbulent months as Mexico’s coach until April this year, he stunned the football world by joining lowly Notts County in the close season.

The Times of London reported that County were prepared to negotiate a deal for Eriksson, describing the move as “bewildering”.

North Korea’s players are in France preparing for next year’s World Cup but could only manage a drab 0-0 with second division Nantes last week followed by another goalless draw on Tuesday night against a Congo side.

A total of just seven goals in eight qualifiers has earned criticism for coach Kim Jung-Hun and his team despite finishing second behind neighbours South Korea in Asian qualifying group two to secure a World Cup place for the first time since 1966.

A shock 1-0 victory over Italy at the 1966 tournament in England secured their place in World Cup folklore before they were eliminated 5-3 by Portugal in the quarter-finals, in what was the team’s last trip to Europe.

Football is the most popular sport in North Korea but Pyongyang’s leadership banned the national squad from travelling abroad after losing to arch-rivals Japan and South Korea in qualifiers for the 1994 World Cup.

The North returned to international football at the Bangkok Asian Games in 1999 but did not compete in qualifying for the 1998 World Cup in France or the 2002 edition in South Korea and Japan.