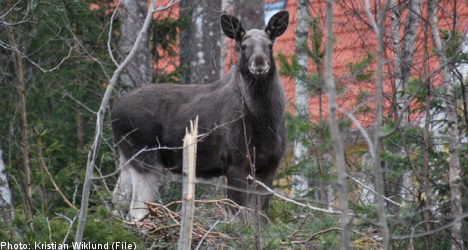 “It ran right at me,” Monica Engström told the Göteborgs-Posten (GP) newspaper following the incident.

“I didn’t have time to realize what was going on, it just came roaring across and kicked me down with its hind legs.”

Engström was out for an early morning stroll with her dog Svennis in a residential area of Utby on the outskirts of Gothenburg.

As Engström was waiting for Svennis to finish his business in the back yard of her sister’s house, the aggressive elk suddenly emerged from the early-morning darkness and went on the attack.

“I was so scared I woke up the entire neighbourhood; they probably thought it was some sort of assault. And it was, except by an elk,” she told the newspaper.

Following the incident, Engström suffered from a number of aches and pains, and remained concerned about a possible concussion due to her violent fall, but was otherwise in good spirits.

“I fell backwards and got a real kick to the head. “It was like getting hit by a train or a tram,” she told the Expressen newspaper.

Nevertheless, she remains disturbed by the elk’s hostile behaviour, and plans to be more cautious in the future.

“I’m not going outside in the morning, that’s for sure,” she told GP.

“If you ask me, wild animals should stay in the woods.”