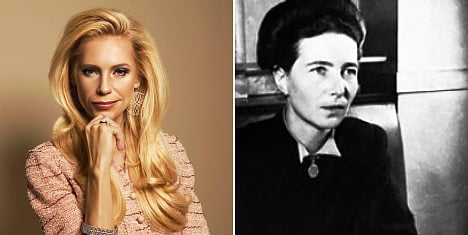 The notion that “too much freedom makes you miserable,” is not a new theme that women have to deal with but it is one that is often cited when a period of societal self-reflection comes around.

“To be a woman at the close of the twentieth century – what good fortune. Women have ‘made it’ the style pages cheer. Women’s fight for equality has ‘largely been won’.”

So began Pulitzer prize winning journalist and author Susan Faludi her zeitgeist book “Backlash – The Undeclared War Against Women” at the heart of the last major financial crisis in the beginning of the 1990s.

As Jeanne Rudbeck writes in these pages, women have even won the right to turn their backs on their careers, to cry “I am a homemaker, and proud of it.”

It is also, while not an age, perhaps more of a passing phase, when a little known exile Swede can grab the headlines by arguing that men are pathetic for exercising the same right (albeit as Rudbeck points out, temporarily – very few of us are living in a celebrity Hollywood context after all).

Anna Anka it now seems also deserves to be considered a feminist, to be discussed on a par with Simone de Beauvoir – the French author of a foundational tract of contemporary feminism, as well as Swedish national icon, Alva Myrdal.

Rudbeck, like Faludi, continues to observe that despite this victorious “free and equal reality” women have never been more miserable.

Indeed there is a whole business, several in fact, which are built and thrive on this situation. Cosmopolitan fills just one small niche in a fashion and beauty industry that trades on this misery to offer quick fix solutions to this deep-rooted malaise:

“The wonder bra – pushing up for your freedom”

…Cosmo’s objectifying message dressed up as a woman’s right to choose – “because you’re worth it”.

“If women have got what they asked for, what could possibly be the matter now?” Faludi asks.

It is the fault of the “feminists,” Rudbeck writes – the “Alva Myrdals and Simone de Beauvoirs who promised freedom from domestic prison and self-actualization in the workplace.”

“Feminists” are habitually held to blame for nearly every “woe besetting women, from mental depression to meagre savings accounts, from teenage suicides to eating disorders to bad complexions,” Faludi observes.

“Feminism” is also apparently to blame for many of the woes besetting men – turning Swedish men into “nappy-changing nonces” who have lost touch with their “real” selves.

Violence against women is also habitually blamed on women in general – skirts too short, too much alcohol consumed… you get the picture; and “feminists” in particular – for fooling generations of women into believing that they actually do have the right to say no.

In “Flickan och skulden” (‘The girl and the guilt’) Swedish writer Katarina Wennstam describes in harrowing detail how the old tale of the “Madonna and the whore” is showing at a courtroom near you.

So “the buyers’ remorse” to which Jeanne Rudbeck refers is, as she explains, hardly surprising when faced with this situation more than 60 years since the publication of de Beauvoir’s groundbreaking tome “The Second Sex”.

But can men? – apparently not. They are just as miserable in their dead end jobs, Rudbeck writes – although not presumably the men who can afford to employ a full time maid and nanny sorry housewife.

Susan Faludi’s follow up book to “Backlash” addressed just this subject. In “Stiffed – The Betrayal of the Modern Man”, published almost a decade later, she lays out the case.

She writes of “The Promise of Postwar Manhood” where little boys were brought up to believe that the future lay in their hands – to roll back the dark forces of communism, to conquer the stars, to claim their fortunes etc, etc.

The truth is that very few of us go on to claim our fortunes, even fewer make it into space. The wisdom of age does provide solace though, and hopefully helps to persuade us that our fortunes can be measured in a myriad of ways.

How many 55-year-old men, who have been selling paper for 30 years of their lives, look back with regret over all that time they could have spent at work?

What are an amazing number of little girls (still) promised? That if they wait long enough, and wear a pretty enough dress, every princess gets her knight in a shiny pin-stripe suit.

Anna Anka, and to an extent Jeanne Rudbeck in turn, point out that if that is your destiny – and don’t complain, it could be a damn sight worse – at least make sure he wears the type of clothing that requires dry cleaning.

So next time you visit your friends’ house – you know the one with a blue, spaceship room for the boy, and a pink, princess room for the girl – ask yourself whether the adult world, which really should know better by now, has a hand in propagating, and perpetuating, this mythical dream.

That myth of uncomplicated happiness, in that grown up reality which exists outside of the pages of a glossy mag or a ‘reality’ television show.

Lest we continue to miss the point – Anna Anka does not represent some (largely fleeting if not entirely fabricated) 1950s ideal of devoted family wife – she employs an army of assistants while claiming to work full time, at the same time arguing not for a woman’s “right” to be a mother, but that it is her “station” in life.

Feminism, like capitalism, liberalism, communism, socialism or any other ism that you care to mention does not promise happiness or bust. Let’s face it; had we had happiness as a yardstick for progress we would have done away with our whole system of wealth accumulation years ago.

So what it is that makes us carry on?

Well many of us, in the developed world at least, don’t – the Swedish daily Dagens Nyheter just this week is running a series of articles on “downsizing”, or “voluntary simplicity” – a sort of post-modern “green wave” that permits us to benefit from the upside of capitalist consumption while tempering its negative effects.

But for those of us that can’t resist the lure of the high street, and are determined to continue trying to push a square peg into a round hole, regardless of the emotional cost – you can always blame your malaise on Adam and Eve, well Eve let’s face it.

Peter Vinthagen Simpson is a freelance writer living in Stockholm. He is currently on paternity leave with the youngest of his three children, despite the World Cup not taking place until next summer.

Anna Anka is politically incorrect, and that made the author mad. So be it.

In his article, Peter Vinthagen Simpson seems to imply that I condone violence against women and slave labour.

Dragging these abominations into a light piece on a docusoap star serves only to trivialize serious issues.

Here are a few facts about the feminist icons mentioned above: Simone de Beauvoir pimped the young students entrusted to her for use by her partner, Jean-Paul Sartre.

Alva Myrdal advocated compulsory sterilization of women she deemed unfit to breed. Her book Nation and Family is credited with having inspired the Swedish eugenics program which continued until 1975.

Anna Anka is harmless compared to these supposed heroines.