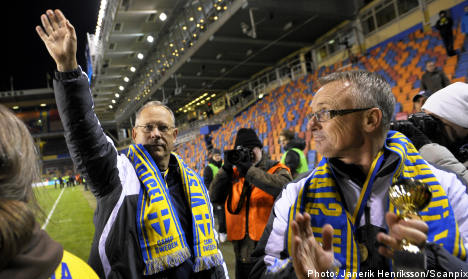 An improbable draw or win by Malta would have allowed Sweden to hang onto second place in Group A and sneak into the play-off.

Instead, Portugal rescued an unconvincing World Cup 2010 qualifying campaign by securing a play-off place with a 4-0 home victory over Malta.

Sweden’s failure to qualify means that one of Europe’s top stars, Barcelona striker Zlatan Ibrahimovic, will not be taking part in the World Cup in South Africa.

“When it’s over it’s over. It’s been a great journey even though the end is bitter,” Sweden coach Lars Lagerbäck said after his team failed to qualify.

Ibrahimovic, who scored in each of Barcelona’s first five matches this year after leading his previous team Inter Milan to three Serie A crowns, failed to work his magic for the national squad throughout the qualifiers.

Instead, the 28-year-old went goalless at the weekend as Sweden lost 1-0 to Denmark in Group A, reducing their chances of a trip to South Africa to a long shot.

While the striker has dazzled for Barca and Inter Milan — he was named Italian Player of the Year in 2009 — he has at times struggled to score for Sweden even though the team has played in five straight major championships: the European championships in 2000, 2004 and 2008 and the World Cup in 2002 and 2006.

Ibrahimovic has scored 22 goals in 61 caps for his country, but failed once again to net a goal at home against the Albanians.

Instead, it was Olympiakos centre-back Olof Mellberg who scored twice for Sweden, with Marcus Berg and Anders Svensson also on target for the hosts, while Hamid Salihi netted a consolation for Albania.

Denmark’s victory over Sweden at the weekend meant they were already assured of qualification as group winners although they rounded off their campaign with a 1-0 defeat to Hungary in Copenhagen.

“It’s over now, there’s nothing we can do it about it. Sure it feels a bit better that we won today but it is really disappointing to miss the World Cup,” said Lagerbäck, who announced at the weekend that he would step down as coach.