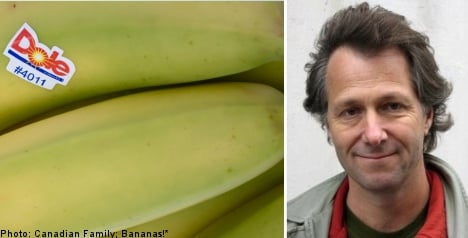 “A court in the US was going to rule on the matter in two weeks. I suspect that Dole realized they had a weak case. They probably thought it was best to pull back before the trial.”

Dole came out strongly against the film, which premiered in Sweden last week, suing Gertten for defamation in the United States in July.

Legal proceedings originally scheduled to begin in Los Angeles on October 8th had been delayed, and on Thursday morning Dole announced it was dropping the case altogether.

While Dole said it believed it had a strong case, it chose to dismiss the suit because of “the free speech concerns being expressed in Sweden”.

The company maintained, however, that the film was inaccurate.

“While the filmmakers continue to show a film that is fundamentally flawed and contains many false statements we look forward to an open discussion with the filmmakers regarding the content of the film,” C. Michael Carter, Dole’s Executive Vice President and General Counsel, said in a statement.

Support for Gertten and his film has grown steadily in Sweden ever since Dole filed the lawsuit, prompting members of parliament from opposing political parties to arrange a special screening of the film.

In addition, several Swedish food companies were considering a boycott of Dole products in response to the lawsuit.

“The support we’ve received from people who’ve sent us money and encouragement has been critical. Having members of the Riksdag take up the issue has also been great and the pressure on Dole has increased,” Gertten told the Dagens Nyheter (DN) newspaper.

News of Dole’s decision reached Gertten on Thursday as he was heading to a meeting with Sweden’s Minister of Culture, Lena Liljeroth Adelsohn, and representatives from several large Swedish grocery chains, to discuss the issue.

While thrilled with the latest twist in his battle with Dole, Gertten stopped short of claiming the matter was fully resolved.

“I haven’t spoken with my lawyer. The damage Dole caused to my film doesn’t go away because of this, and our countersuit remains. We’ll have to see how we’ll proceed,” he told TT.

But one of Gertten’s supporters in the Riksdag was more emphatic in claiming victory.

Johansson, along with his Social Democratic colleague Luciano Astudillo, arranged for a viewing of Bananas!* in the Riksdag

“It’s unbelievable what we, who are sometimes portrayed as indecisive button-pushers, can achieve: to get a powerful, global multinational company like Dole to change course.”

“That Dole has dismissed the lawsuit doesn’t change anything. Even if we’re really happy that the threat against Bananas!* is gone, what has happened isn’t an isolated case. It can still happen to others, and that’s something we obviously want to discuss,” he told the newspaper.