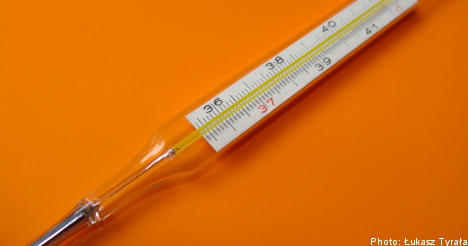 Researchers at Örebro University Hospital have instead shown that the most accurate body temperature readings come from measurements taken by a rectal thermometer, Sveriges Radio (SR) reports.

“If you want to trust one single reading, which you often have to do in an emergency room or local health clinic, then an aural or oral thermometer isn’t accurate enough. It doesn’t really work in practice,” Örebro chief physician Hans Holmberg, one of the study’s authors, told SR.

Measuring body temperature in the ear is complicated by the presence of wax and hair in the aural passage.

Using an oral thermometer can be problematic because it can be hard for patients to really hold their mouths closed for a sufficient length of time.

A total of 323 patients participated in the study, which was carried out from 2007 to 2008 and compared the repeatability of measurements taken from aural and oral thermometers with readings from rectal thermometers.

“The results imply that neither of the [oral or aural] tested thermometers constitutes a satisfying alternative to rectal thermometers,” the study concludes.

In the wake of the study, which is published in Läkartidningen, a trade journal of the Swedish Medical Association, the country’s Medical Products Agency (Läkemedelsverket) has promised to review their recommendations to Swedish healthcare practitioners.

“Now that this has been brought up, and these people in Örebro have persisted with their testing and produced a foundation, we’ll take it into consideration,” the agency’s Sven Jacobson told the radio station.