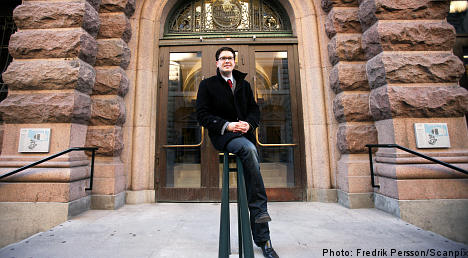 Jimmie Åkesson poses outside the Riksdag

While 83 percent of Swedes agreed with the statement that the Sweden Democrats were a “racist party”, 38 percent considered it correct for the other major parties to cooperate with them, according to a new Demoskop survey.

Among sympathizers with the centre-right Alliance coalition parties, 42 percent backed cooperation with the Sweden Democrats if they garnered more than the four percent of votes required to enter parliament.

Of the voters supporting one of the centre-left red-green coalition, 30 percent supported a cooperation.

“The other parties say that they do not want to cooperate, or they say nothing. I am quite convinced that people want order in our parliament,” Sweden Democrat leader Jimmie Åkesson told the Expressen newspaper.