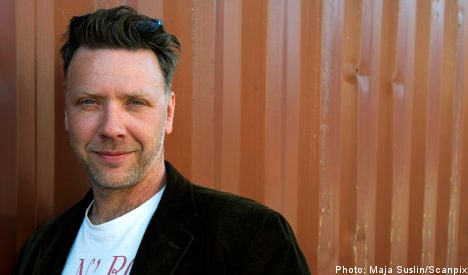 Persbrandt has recently announced his intention to launch a career as a businessman and first up is a stab at the Swedish underwear business, a field previously dominated by athletic icons Björn Borg and Börje Salming.

Macho male lead Persbrandt is not however afraid of the locker room competition and is set to put his name to the Frigo brand in time for the Christmas season campaign.

“A jock for well-hung men in need of elegant Christmas presents,” is how the actor described the item in an interview with the Dagens Industri (DI) newspaper.

The actor, who is soon set to launch his Hollywood career in Susanne Bier’s “Civilization”, the Danish director’s follow up to “Things we lost in the fire”, told the newspaper that he had invested a sum sufficient to claim a seat on the board of Revolution Wear, the clothing firm behind the sturdy underwear.

The firm owns a patent for the design of male underwear incorporating a sort of draw string pouch enabling the wearer to keep their “crown jewels” in a tidy fashion.

The figure-hugging jocks are claimed to be popular among cyclists and racing drivers as the unique design helps to minimise chafing and the build up of sweat.

Persbrandt however rejected the suggestion that the underwear were a form of push-up “wonder pant.”

“If you have that problem then you can always ease in a pair of woolly socks instead,” Persbrandt suggested to DI.

The underwear it seems will not only give support to its male bearer but UN children’s charity Unicef also stands to benefit from burgeoning sales, with a promised donation per item sold.

The 46-year-old actor confirms that he is considering several further investments as he seeks to balance a budding international film career and life as a hands-on family father.