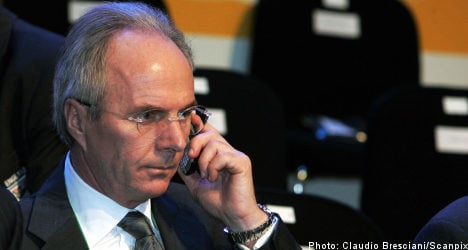 At the weekend, Eriksson’s agent Lars Sternmarker confirmed that football federation chair Lars-Åke Lagrell had spoken with the former England and Mexico coach about coming home to Sweden.

“Lars-Åke has spoken both with me and ‘Svennis’. But I don’t want to say anything more,” Sternmmarker told the newspaper.

Speculation about who would replace Lars Lagerbäck, who stepped down last week following Sweden’s failure to qualify for the 2010 World Cup in South Africa, continues to keep the country’s sports journalists guessing.

Eriksson’s name has figured prominently among candidates rumoured to be in line for the job, which Lagerbäck held since 2000.

The 61-year-old Eriksson, currently the head of football operations for Notts County in England’s fourth division, made headlines last week amid rumours he was set to take over in North Korea, which qualified for the World Cup finals for the first time since 1966.

While Eriksson reportedly turned down the North Korea job, he has expressed a willingness to explore coming home to coach for his native Sweden, his close friend and advisor Tord Grip told Expressen.

When asked about his reported contact with Eriksson, Lagrell refused to elaborate.

“I can neither deny or confirm that we’ve been in contact with ‘Svennis’. But I can say that we’ve been working hard over the weekend and called many people. There are three things we’re looking for: interest in the job, the ability to take the job and the economic requirements. I also read the papers and see that many are interested in the national team coaching job and that’s great. It would be terrible if it were the opposite,” Lagrell told the TT news agency.