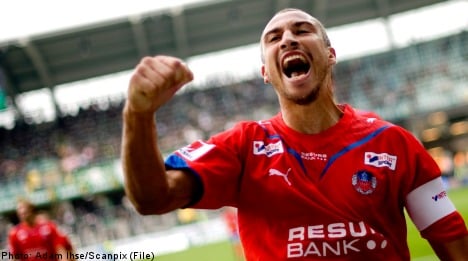 “I know now that I’m 100 percent sure about my decision to quit,” Larsson said in a statement.

Larsson had already announced his career with Sweden’s national side was over after the team crashed out of World Cup qualification last week.

But it took a few more days for him to conclude it was time to end his professional career as well.

Larsson, who currently plays with Helsingborg IF (HIF) in Sweden’s top league, will lace up his boots for the last time when his squad takes on Elsfborg in an away match on November 1st.

after this season,” Helsingborg said in a statement on its website.

One of the most successful and well-known Swedish football players of modern times, Larsson launched his international career in 1993 with the Dutch club Feyenoord. He then helped Scottish club Celtic to four league titles and took part in Barcelona’s two league championships in 2005 and 2006 before returning to his home Swedish club in Helsingborg.

He also played several matches for Manchester United in 2007 while on loan from HIF.

Larsson’s debut for the Swedish national team came in 1993, a squad which went on to reach third place in the 1994 World Cup.

Over the course of his career, Larsson has racked up 106 caps and 37 goals. He also scored goals in three separate World Cups.

“I’m going to have a think about what I’m going to do. First and foremost I need time to get used to life after football.”