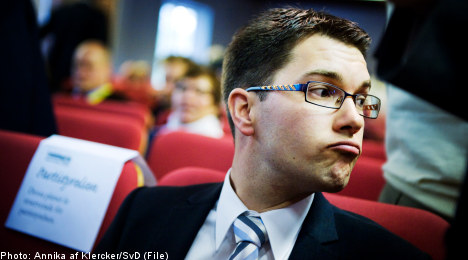 The anti-racism organization called on the Chancellor of Justice (Justitiekanslern – JK) to examine whether claims made by the head of the far-right party were tantamount to agitation against an ethnic group (hets mot folkgrup).

Åkesson’s article, published in Aftonbladet on Monday, has provoked a furious reaction following the Sweden Democrat chief’s assertion that the spread of Islam represents the country’s “greatest external threat since World War II”.

“We are of the view that the article agitates against Muslims when it points at Islam as the greatest threat to Sweden,” said Mariam Osman Sherifay, head of the organization and Social Democrat politician, to the TT news agency.

Osman Sherifay was also highly critical of Aftonbladet’s decision to print the article, a move she said was out of step with established journalistic standards.

“The newspaper is giving the Sweden Democrats space that they don’t deserve. The fact that they’re racists is not news. Aftonbladet could instead have examined the party’s views,” she said.

Osman Sherifay’s political rivals, the conservative Christian Democrats — currently the smallest of the four parties in the governing centre-right coalition — were also quick to shoot down Åkesson’s comments.

“My understanding of media reports from the weekend’s Sweden Democrat conference was that they wanted to broaden the party and show that they have more strings to their bow than just xenophobia,” said party leader Göran Hägglund in a written comment to The Local.

“But when they formulate this opinion piece all we get once again are sweeping accusations portraying an ethnic group as a threat, all of which is based on facts that are dubious to say the very least.”

Tempers have flared between the two parties in recent months as the battle heats up for the conservative vote. A number of opinion polls have indicated that the Sweden Democrats are closing in on the four percent threshold necessary for representation in the Riksdag as the Christian Democrats struggle to keep their heads above water.

Relations between the two reached perhaps their lowest ebb during the summer when the Christian Democrat leader accused the Sweden Democrats of failing to shake off their Nazi past. But this didn’t stop Åkesson from weighing in recently on Hägglund’s side as the latter slammed Sweden’s “cultural elite” for their purported antipathy towards “regular people”.

But Hägglund, who has called on the established parties to tackle the Sweden Democrats head on, was keen to reiterate his view that the Christian Democrats have little in common with their challengers from the far-right.

“Theirs is a viewpoint that places the value of human life on a scale. Some are worth more than others. The way their party views human life is light years away from both my own view and that of my party,” he said.