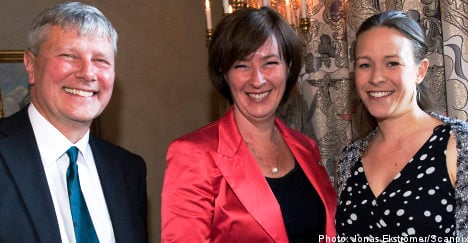 “We won’t leave one another,” he told the TT news agency.

Ohly admitted that his earlier opposition to increased cooperation with the Social Democrats and the Green Party ahead of next year’s parliamentary elections was wrongheaded.

“I was wrong,” he told journalists during a Tuesday press conference.

In announcing his about face, Ohly cited increased pressure from voters, including leaders from Swedish labour unions.

The question of the Left’s willingness to work with other left-leaning parties was also made more pressing following an article in the Dagens Industri newspaper questioning the Left’s place in the Riksdag should the far-right Sweden Democrats make it into the Riksdag following the next election.

The article claimed that the Greens may join together with the Centre Party and the Liberals (Folkpartiet), both of which are currently in the governing centre-right Alliance coalition, in order to keep the Sweden Democrats from achieving a kingmaker roll in a new government.

“We’re all in agreement that we’re sticking together, even if such a situation comes up, just as we’re not going to create any red-green government with support from the Sweden Democrats,” Ohly told reporters.

According to the Left Party leader, there is no chance that the Greens or the Social Democrats would abandon his party in favour of cooperation with any of the centre-right parties.

The Left Party has previously been cool to the idea of developing a common electoral platform with the Social Democrats and the Greens, preferring instead that each party develop its own policies to ensure that election results reflect voters’ level of support for given policies.

But Ohly is confident that when the party meets for its next party conference in May, the Left will adopt his new line of thinking, which also means that the Left won’t push issues which go against compromises already reached with the other two parties.

“I’m convinced that the conference will accept that certain questions need to be decided through the red-green partnership,” said Ohly.

“It’s more important to have a change in government than to grow the ranks of the Left Party.”

Ohly’s announcement of his party’s new approach to working with the Greens and the Social Democrats comes amid mounting concerns about the electoral chances of the far-right Sweden Democrats following party leader Jimmie Åkesson’s controversial opinion article in which he claimed that Muslims represent Sweden’s greatest external threat.

The article, published on Monday in the Aftonbladet newspaper, has been reported as hate speech to Sweden’s highest legal official, who is now considering the matter.