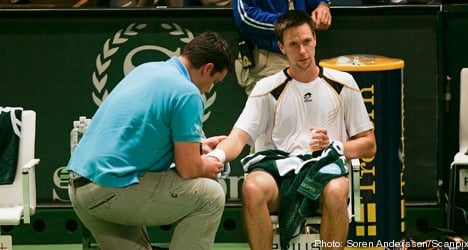 The effects of a long season caught up with the Swedish world number 10, who is just a place away from a possible spot in next month’s eight-man ATP World Tour Finals in London.

Söderling still has a week to make a decision on his fitness, with his next event in Valencia starting on November 9 followed by the Paris Masters.

“Doctors tell me I can’t make it worse, so if it feels better in a week than maybe I can play Valencia,” said this year’s French Open finalist.

“I could tell in my quarter-final on Friday that it might be my last match here. I want to play as soon as possible but I’ll give the injury some time.

“It’s an elbow muscle that I’ve over-used. I’ll play again as soon as I can.”

Cyprus’ Marcos Baghdatis, the 2006 Australian Open runner-up who was due to face Söderling, said his place in the final was bittersweet.

“I’m sorry for Robin, it’s not easy to retire, especially when you’re playing at home,” he said of the two-time Stockholm finalist.

“I knew it would not have been an easy match for me today. He was the favourite, playing with the home support and indoors.”