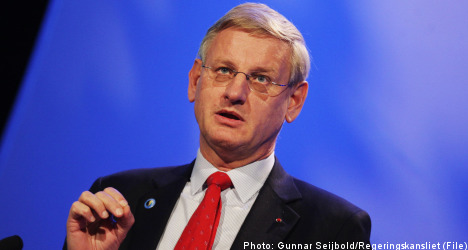 Custom dictates that the foreign minister of the country currently holding the rotating presidency of the European Union pay a visit to officials in Jerusalem.

Bildt had a visit scheduled to take place in September, but the trip was cancelled shortly before it was to take place.

While Bildt cited scheduling conflicts in announcing his decision to forego the September visit, there was speculation in the Israeli press that the Swedish foreign minister decided to skip his trip to avoid dealing with latent hostility following an article published in the Swedish newspaper Aftonbladet alleging that the Israeli army had harvested organs from dead Palestinians.

According to a high ranking official in Israel’s foreign ministry, the silence from Bildt regarding a new date for the visit has come as a surprise to officials in Jerusalem, who now suspect that the Swedish foreign minister may be sending a message to Israel.

“If he were a newcomer to diplomacy, it could be somewhat defensible. But Carl Bildt is a very intelligent and experienced man. That makes us think it’s more likely some sort of signal,” the Israeli foreign ministry source told the Dagens Nyheter (DN) newspaper.

Bildt spokesperson Irena Busic insisted, however, that Bildt intends to visit Israel before Sweden’s EU presidency ends at the end of the year, but she had no specifics regarding a possible date.

Relations between Sweden and Israel remain strained following the publishing of the Aftonbladet article about organ theft, with both Bildt and prime minister Fredrik Reinfeldt refusing to publicly condemn the story, despite repeated demands from Israel.

Both argue that speaking out against the article would violate free speech protections in Sweden’s constitution.