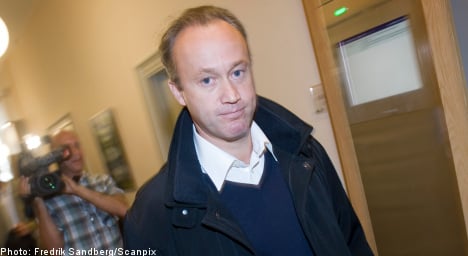 Jisander, who sought to have the previous conviction overturned, was fighting charges of having ordered the sum be transferred from the Trustor investment company to Liechtenstein-based foundations under his control in the late 1990s.

He was convicted of grave embezzlement by the Stockholm District Court in May 2008 and sentenced to eighteen months in prison, although the court acquitted him of suspicions of tax fraud.

In its summary judgment, the appeals court found that there was no doubt whatsoever that Jisander participated in the criminal takeover of Trustor and that he knew the purchase of then-owner Per-Olov Norberg’s Trustor stock would be paid for from Trustor’s own accounts.

As a result, the court ruled that Jisander didn’t have the right to profit from the $2.8 million which was paid out to him.

“The payment has thus occurred for a purpose which was out of place in Trustor’s operations, which means that the payment was detrimental for Trustor,” the court wrote in its judgment.

Jisander’s defence attorney Leif Silbersky was quick to take issue with the ruling.

“The sentence of one and a half years is too sever. It should have been a suspended sentence,” Silbersky told the TT news agency.

“Such a harsh ruling after nearly 12 years of investigations and trials is inappropriate. It’s not Thomas Jisander’s fault that things have dragged on so long.”

The Trustor affair stems from a 1997 transaction involving British businessman Lord Moyne, who illegally bought a majority stake in Trustor by financing the purchase with Trustor’s own money .

Shortly afterwards, it became clear that the company had been subject to a major fraud.

Lord Moyne, a writer and son of the well-known British aristocrat Diana Mitford, was cleared of any wrongdoing.

Jisander, who had helped set up the deal, was convicted in 2001 but subsequently freed on appeal.

In 2004, a court ordered another principal player in the scandal, Joachim Posener, to pay back 125 million kronor to Trustor. The case was tried in his absence, and attempts to find out where he was hiding were unsuccessful.

Posener disappeared from Sweden in the wake of the Trustor affair in 1997 but the time limit for his prosecution has now expired.