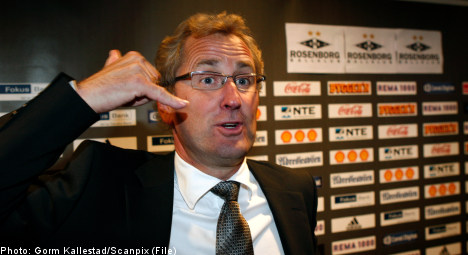 “I was asked if I was interested (in the position) now and in the long term and I answered yes to both questions,” said the 52-year-old, who is under contract with Rosenborg until 2010.

“I haven’t had an offer and I haven’t accepted an offer,” he added.

The Swedish Football Federation would however first have to reach agreement with Rosenborg to allow the coach to leave and the first reactions from the champions have been negative.

Hamrén arrived in June 2008 from Danish side Aalborg, and he transformed the Norwegian club, who blazed to the title with just one defeat.

Since Lagerbäck’s last match as coach, a convincing albeit meaningless home win against Albania, officials with the Swedish Football Federation have been working vigorously to find his replacement.

Top candidates Sven-Göran Eriksson and Hans Backe have withdrawn from consideration for the job in favour of positions with English club Notts County.

Eriksson, currently director of football with Notts County said his obligations to the club prevented him from pursuing the Sweden job.

He then proceeded to take another leading candidate, his former assistant Backe, out of the running for the Sweden job by appointing him as the new manager for the English League Two club.

Backe previously worked with his fellow Swede when ex-England coach Eriksson was in charge of Manchester City and the Mexico national side, having also won four Danish titles in his own right as a manager with Copenhagen and Aalborg.

Another possible candidate, Fulham manager Roy Hodgson, has said previously he hasn’t been approached about the job and that he expects his future to remain with the English Premier League club.