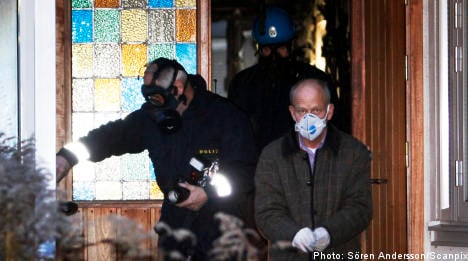 “We do not suspect any crime. The exact circumstances surrounding the incident are not yet known,” police spokesperson Christina Johansson told the TT news agency.

Police were called to the apartment after the 74-year-old woman living there failed to turn up for an appointment at a care centre for the elderly.

Rescue services were later called to the scene, where they found three people lying dead in the fire-damaged apartment. The fire had petered out of its own accord, and it has not yet been ascertained exactly when the blaze occurred.

“The fire probably broke out some time between Monday and today,” said Johansson.

None of the three people who perished in the fire have yet been identified, and police have no information regarding the age or sex of the victims.

Fire rescue officials said one of the rooms in the apartment had burned in the fire, while the remaining rooms were smoke-damaged. As the apartment remained intact and no windows were broken, experts believe the fire may have gone out due to a lack of oxygen.