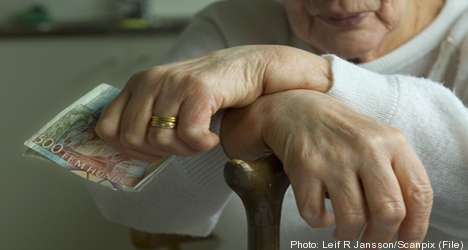 The proposal ensures pensioners would not pay more tax than wage-earners and would be ”a big first step” should the party win the general election next year.

”Then we begin the march towards getting rid of the gap that has been created between our pensioners and wage-earners,” said Thomas Östros, the party’s economic spokesperson. ”It is unacceptable.”

”We lost a lot of votes from pensioners in the last election,” he said. ”We can take those back if we handle this well.”

”They are unhappy with the unreasonable, unfair and immoral taxes,” he said. ”If the Social Democrats want to win the pensioner vote we must be able to give them clear answers.”

The party also stated that wage-earners, the unemployed, those on sick leave and pensioners will be treated equally with those earning more and making larger contributions.

In addition, tax deductions for household cleaning services will be abolished and wealth tax will be re-introduced.

Despite widespread agreement, some members expressed reluctance over the wealth tax issue.

”We have to put more emphasis on high earners paying a higher rate of tax,” said Gabriel Wikström,” party representative from Västmanland. ”But the solution isn’t to resort to wealth tax. It is not considered fair by many.”

Thomas Östros defended the proposal. ”It is needed to some degree to share the burden in the tough period we have ahead of us,” he said.