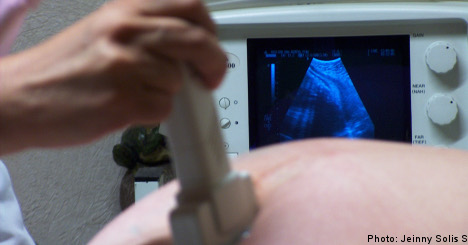 A review of files by Sveriges Radio’s Brunchrapporten 24 news programme from ten Swedish hospitals, including large institutions like Karolinska in Stockholm and Sahlgrenska in Gothenburg, revealed that 24 expectant mothers were mistakenly told they had had a delayed miscarriage. A ‘delayed’ or ‘missed’ miscarriage occurs when the foetus dies but remains in the womb.

As a precaution, hospitals are always supposed to perform a second examination when an ultrasound reading indicates a miscarriage has taken place.

But the radio programme’s investigation showed that only half of the hospitals included in the review routinely perform the second exam, with the remainder simply giving women a prescription for hormone pills commonly known as “abortion pills” which help force the foetus and any remaining tissue out of the body.

The Local spoke recently with Jenny Huber, a 24-year-old mother-to-be who was informed by a doctor at Stockholm South General Hospital that her foetus had died.

But Huber was reluctant to take the pills she was prescribed to help force out the foetus and eventually sought a second opinion. The second doctor told Huber that the foetus she was carrying was completely healthy.

“When they told me that everything looked fine I couldn’t believe it. I was shocked. It took a very long time to understand what had happened,” she said.

But not all misdiagnosed miscarriages are revealed before women elect to ingest hormones or undergone procedures to remove the embryos.

According to Brunchrapporten, about half of the cases reviewed resulted in healthy foetuses being seriously damaged or killed as a result of the faulty diagnosis.