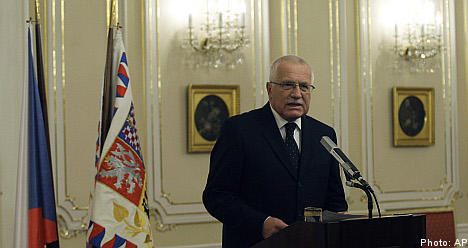 “Czech President Vaclav Klaus has signed the treaty. Thus the final hurdle in the way of the Treaty of Lisbon has been cleared,” Swedish Prime Minister Fredrik Reinfeldt said in a statement.

The Swedish PM, whose country holds the rotating EU presidency, added that he would call an EU summit shortly and would “now begin name consultations” among the 27 member states on who to choose as the first EU Council president and the foreign policy high representative which the treaty creates.

Reinfeldt also announced officially that the Lisbon Treaty, devised to streamline the European Union and ease its decision-making process, could now come into force on December 1.

That became possible after a Czech constitutional court ruling opened the way for the eurosceptic Klaus to join his 26 fellow European leaders and ratify the treaty, which he did earlier on Tuesday.

“After a long journey, the Treaty of Lisbon has reached the goal… The Treaty enters into force on 1 December and all the details must now be put into place,” said a relieved Reinfeldt.

Treaty opponents warn that the text represents a major step towards a federal Europe.