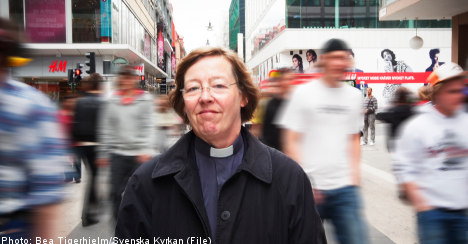 Five bishops from various levels within the Anglican Church, including Archbishop of Canterbury Rowan Williams, have decided not to attend the November 8th ceremony, the Dagen newspaper reports.

Alan Harper, a bishop from Armagh in Northern Ireland, is also reported to be observing a moratorium on the ordination same sex bishops.

Coming just three weeks after Sweden granted same-sex marriages the same legal status as those between heterosexual couples, Brunne’s appointment in May 2009 to be the next bishop of the Church of Sweden’ Stockholm Diocese raised eyebrows in Sweden and abroad.

As the Church of Sweden has taken a more welcoming stance toward homosexuality, exemplified most recently in the October 22nd decision to allow church weddings for gay couples, its relations with the Church of England have become increasingly strained.

Back in July, two UK bishops warned that allowing homosexuals to be married in Swedish churches would lead to “an impairment of the relationship” between the Church of England and the Church of Sweden.

Brunne, who lives with Church of Sweden pastor Gunilla Lindén, was first ordained as a pastor in 1978 in Lund in southern Sweden, before moving to Stockholm in 2006.

She is set to be ordained as a bishop in Uppsala in eastern Sweden alongside another female pastor, Tuulikki Koivunen Bylund, who will take over as Bishop of Härnösand in northern Sweden.

Swedish Archbishop Anders Wejryd, who will conduct the ordination of Brunne and Koivunen Bylund, disputed the claim that the Church of England was somehow boycotting the ceremony.

“That’s not true at all,” he told the Kyrkans Tidning newspaper.

“We send invitations to those with the highest rank. That’s why the Archbishop of Canterbury received an invitation, but no one expected him to say yes.”

He added that the Church of England would be represented by the Reverend Karen Schmidt, who serves as the Bishop’s Chaplain for the Portsmouth Diocese, with which the Stockholm Diocese has a twinning relationship whereby church leaders from both diocese conduct reciprocal visits with one another.

“The bishop, David Bingley of Portsmouth, couldn’t make it but will attend Eva Brunne’s reception the following Sunday,” Wejryd told the newspaper.

In addition to some bishops from the Churches of England and Ireland, the churches of Iceland, Estonia, Latvia and Lithuania, as well as the World Lutheran Federation have also elected to skip the ordination, although without providing any specific reason.

According to Wejryd, the international invitees who have declined to come include “many who generally never come”.

On the other hand, representatives from the churches of South Africa, the Philippines, Denmark, Norway, Finland, and Germany have indicated they plan to attend Sunday’s ordination.