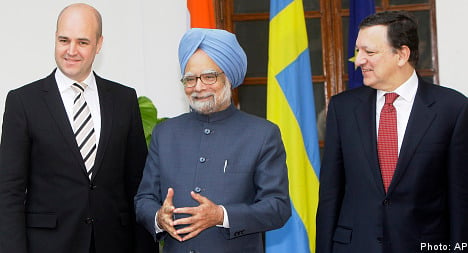 At an annual European Union-India summit, Reinfeldt, whose country currently holds the rotating EU presidency, said the South Asian giant was already feeling the cost of rising global temperatures which had resulted in scanty rain, sudden floods and melting glaciers.

“So we already see all this happening at (an average rise of) 0.7 centigrade” in global temperatures, Reinfeldt told reporters at a press conference in New Delhi, flanked by Indian Prime Minister Manmohan Singh and European Commission chief Jose Manuel Barroso.

“What we are trying to achieve in Copenhagen is an agreement to stop the increase (of global temperatures) at two degrees because if we feel this at 0.7 degrees, it will be worse at two degrees.”

He added: “We will do our part, but we cannot do things alone.”

The EU has committed to reducing its emissions of harmful greenhouse gas by 20 percent from 1990 levels and has said it could increase the target to 30 percent if an international agreement was reached in Copenhagen.

India has resisted binding emissions targets, while demanding financial aid and technology to help reduce its output of greenhouse gases.

“We recognize that climate change is a global phenomenon and all of us have an obligation to work together… The question arises whether we can quantify the emission reduction targets. We haven’t reached that stage so far,” he said.

Some 190 countries will meet in Copenhagen between December 7-18 to try to conclude a new United Nations-backed climate treaty to replace the Kyoto Protocol, which expires in 2012.