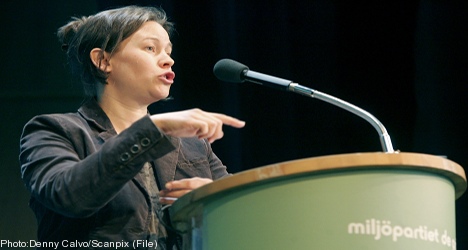 Support for Reinfeldt is at an all-time high according to a survey compiled by pollster Synovate and published by newspaper Dagens Nyheter.

With 54 percent of voters pledging their confidence in Prime Minister, he has polled the highest level of support since becoming the Moderates party leader in 2003.

For the first time, however, Wetterstrand has emerged as his closest rival; 38 percent of voters back the 36-year old who has shared the Green Party leadership role with Peter Eriksson since 2002.

The result has prompted suggestions that she could take a more visible role within the election challenge from the opposition parties.

”If there is anyone who could pull over voters from the centre-right alliance it is Maria Wetterstrand,” Nicklas Källebring, Synnovate’s analysts told DN.

”It’s a situation where the where the opposition could gain by allowing Wetterstrand to take up debates with Reinfedlt instead of Sahlin,” he adds.

Sahlin is backed by 31 percent of the voters polled, just behind Centre Party leader Olofsson at 32 percent. They are followed by Liberal Party leader Jan Björklund (25 percent) and the Christian Democrats’s Göran Hägglund (23 percent)