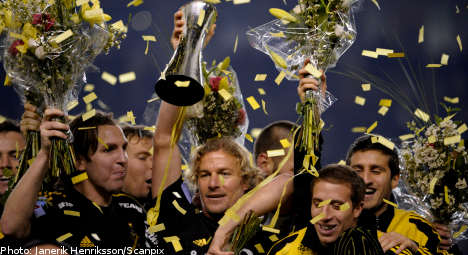 AIK were convincing in dispatching IFK Gothenburg 2-0 at Råsunda stadium.

IFK were left to lick their wounds after missing out again on the silverware having lost the Allsvenskan league championship decider at Ullevi last week 1-2.

“I am extremely proud and happy. It is fantastic. It doesn’t get better than this in Sweden,” AIK coach Mikael Stahre proclaimed after the win.

AIK opened the match at full speed, playing aggressive, attacking football and dominating possession. 15 shots were recorded by the Solna “Rodents” in the first half although no goals were registered by the time the teams went in for the break.

In the 72nd minute AIK won a free kick. IFK goalkeeper, Kim Christiansen, was unable to hold on to a thundering shot from Jos Hooiveld and Iván Óbolo was on hand to finish off the rebound.

IFK made a gallant attempt to get back into the match but AIK’s defence has been water tight all season and openings proved hard to find.

Flavio, one of AIK’s more successful signings through the years, was then able to take advantage of the holes left in IFK’s backline to put the tie beyond the hapless Gothenburg with a second goal in injury time.