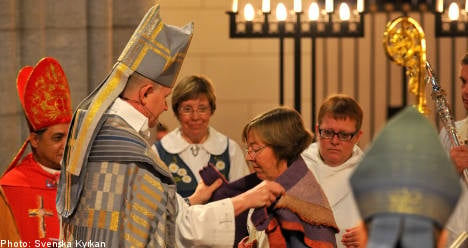 Eva Brunne, 55, was consecrated as the Bishop of Stockholm in a ceremony at Uppsala cathedral, just north of the Swedish capital, the Church of Sweden said in a statement.

Along with Brunne, another female pastor, Tuulikki Koivunen Bylund, was ordained to take over as Bishop of Härnösand in northern Sweden.

The ceremony marked the first time in the history of the Swedish church that two women had been consecrated as bishops at the same time.

Brunne is in a civil union partnership with another woman. Together they are the guardians of a three-year-old child.

The Church of Sweden, which was the state church until 2000, had backed the parliament’s adoption of the gay marriage law, which took effect on May 1. But its synod only approved church weddings on October 22.

Sweden, already a pioneer in giving same-sex couples the right to adopt children, becomes one of the first countries in the world to allow gays to marry in a major Church.

Around three-quarters of Swedes are members of the Lutheran Church.