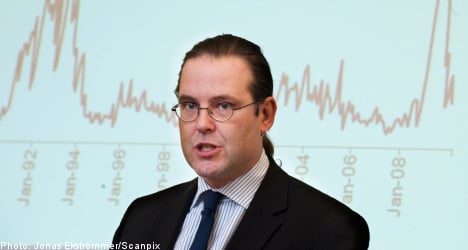 “The world has landed on its feet following the crisis,” Borg said in a statement when he presented the government’s latest economic forecast on Monday.

“There is reason to be more optimistic about developments in the Swedish economy,” he added.

According to the new forecast, Sweden’s GDP is expected to shrink by only 4.9 percent in 2009, compared to earlier forecasts predicting a drop of 5.2 percent.

Unemployment figures were also slightly improved in the new forecast, which projected a jobless rate of 8.5 percent, rather than the previously expected rate of 8.9 percent.

In 2010, the Swedish economy is expected to expand by 2.0 percent, a substantial boost to the previously projected growth rate of 0.6 percent.

Unemployment was however expected to remain high in the coming years, in what is seen as a dark cloud hanging over the centre-right government.

Swedish Prime Minister Fredrik Reinfeldt has made getting Swedes into the workforce his number one priority since coming to power in 2006 but due to the crisis the jobless rate has risen significantly, with less than a year to go until next September’s general election.

“The situation on the labour market will remain difficult,” he warned.

He said economic stimulus measures implemented during the crisis ought to stay in place for the next few years.

“Economic policy must remain expansive in the future. It will be a challenge to create new jobs,” he stressed.

He added that Sweden has coped well with the economic downturn, but that work remains to be done.

“We’ve avoided a depression and we haven’t had a banking crisis, but fiscal policy must remain strongly expansive so that we can stop unemployment from taking hold,” said Borg.

“We’re not going to experience what we experienced in the 1990s with several years of redundancy notices. We’re already back to 1994 levels,” he added, referring to Sweden’s unemployment rate.

In light of the improved forecast, Borg concludes that Sweden’s recovery will be somewhat stronger and that stimulus measures ought to continue during 2010 and 2011.

In addition, public finances will gradually be returned to balance, and eventually to surplus, according to Borg.

However, instability in the Baltic countries and a second wave in the financial crisis continue to threaten Sweden’s nascent recovery.

But unlike many other countries, Sweden’s public finances are in good shape, as are private savings, providing the country with an added buffer against another possible downturn.

Borg also emphasized the positive spiral of increasing confidence in the economy.

Despite the government’s increased optimism about the Swedish economy, however, a forecast also released on Monday by Almega, an organization representing employers in the service sector, paints a somewhat less encouraging picture

The organization’s economists project that 123,000 people will drop off the country’s payrolls this year, including 77,000 manufacturing workers and 15,000 from the private service sector.

While Almega also believes Sweden is heading out of the economic crisis, the group foresees a slow and prolonged recovery and urged the government to implement additional measures to speed up the process, including making it easier for companies to make investments and find workers that match companies’ specific needs.