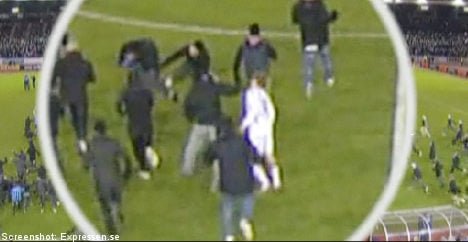 The incident occurred just after the final whistle in Djurgården’s 3-0 play-off victory over Södertälje-based Assyriska, who were battling for a place in Sweden’s top football league, the Allsvenskan.

Dozens of jubilant Djurgården fans swarmed onto the pitch at Stockholm Stadium in a spontaneous display of excitement after a late score by veteran midfielder Mattias Jonson gave Djurgården the victory they needed to win the two-leg playoff.

But rather then restrict themselves to rejoicing in Djurgården’s successful campaign to stay in Sweden’s top football league, fans of the Stockholm club went after several Assyriska players, sending one to hospital, and casting a grim shadow over what had been one of the few bright spots in an otherwise dismal season for Djurgården.

“I didn’t think I needed to run because I thought they just wanted to celebrate the win, but then I got two kicks to the thigh and back from a guy who also threatened me afterwards,” said Assyriska defender Fredrik Samuelsson to the Expressen newspaper, describing the scene as the pitch was overrun with menacing Djurgården supporters.

Samuelsson’s teammate Mattias Genc had his face spit upon and was attacked from behind.

“I was afraid. There were 2,000 people who rushed onto the field, so what am I going to do,” he told the newspaper.

Altogether, at least four Assyriska players were assaulted, including midfielder Andi Toompuu, who was forced to seek treatment at hospital after being punched in the face by a Djurgården fan.

“Nothing is broken or anything, but it’s pretty swollen around my eye,” he told Expressen.

“I’m really depressed, not only because we lost the match, but my face hurts too. I’m surprised it happened.”

Assyriska’s marketing manager Robil Haidari said the incident, which the team has reported to police, amounted to a black eye, not just for Toompuu, but for Swedish football in general.

“It’s a setback for Swedish football when something like this happens. It’s too bad that it happened and shouldn’t be allowed to happen. But it’s also a matter for police, since we’ve now reported the incident.”

Officials from Djurgården were equally dismayed that the team’s victory was marred by the post-game violence.

Police are in the process of reviewing film from security cameras, as well as broadcast footage from TV4, which aired the match on television.

Djurgården’s head of security Mats Jonsson was also saddened that the behaviour of the team’s fans detracted from what should have been a happy occasion for the team.

“I think what happened is absolutely horrible. Here we’ve managed to stay in the Allsvenskan and have something to celebrate, and then they go after the opposing players. There’s no way to defend it,” he told Expressen.

On Monday, officials with the Swedish Football Association were reviewing the incident to determine what type of sanctions Djurgården may face as a result of the fans’ violent behaviour.

“Theoretically Djurgården could be punished by having to play the first matches of next season in front of empty stands. But practically speaking, I’m guessing that they will be fined,” said Khennet Tallinger of the football association’s disciplinary committee, to the TT news agency, adding that the fine could be as high as 500,000 kronor ($72,500).

“We take what happened very seriously, but exactly what the fines will be depends a great deal on how things happened, what sort of measures Djurgården had taken to prevent something like this,” said Tallinger.