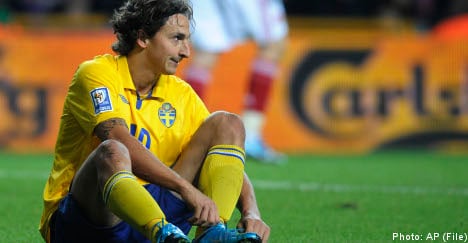 Ibrahimovic’s claim to being Sweden’s top male football talent was affirmed once again at a Monday night ceremony held in his hometown of Malmö where he took home an unprecedented fourth Golden Ball, awarded annually by the Aftonbladet newspaper and the Swedish Football Association.

But the moment was a bittersweet one for Ibrahimovic supporters, who had just heard the news that the Barcelona forward was not among the players picked to represent Sweden in its upcoming friendly against Italy, in part due to lingering doubts about his future with the Swedish national team.

Earlier in the evening, new national side coach Erik Hamrén cited Ibrahimovic’s misgivings as one of the reasons he had decided to leave the star out of the squad.

“He has doubts about his future with the national team and until he has made a decision, I won’t call him up to the squad,” Hamrén said at a press conference announcing the squad for what will be his first match at the helm.

“This is something that he has been thinking about for some time,” said Hamrén, emphasizing that the decision had nothing to do with his taking over as national team trainer from Lars Lagerbäck.

Hamrén added that the news, received during a phone conversation with Ibrahimovic on Sunday, had taken him by surprise.

“I had hoped for a better start,” said Hamrén, adding that he plans to meet with Ibrahimovic face-to-face to further discuss his decision.

While Ibrahimovic’s doubts were news to Hamrén, both national team players and officials had known of his concerns for some time.

“He has told us he wanted to think about what he would do about the national team. The issue has been out there since September,” said national team technical director Lars Richt to the Expressen newspaper.

Teammate and friend Olof Mellberg told the newspaper he had also had previous conversations with Ibrahimovic about his future with the national team.

“The thoughts have been around for awhile. It’s obviously not a decision he’s going to make overnight,” said Mellberg.

“A player of Zlatan’s dignity is allowed to reflect in peace and quiet without pressuring him in this way,” Raiola told the Aftonbladet newspaper.

“Zlatan is injured, tired, and very disappointed that Sweden failed to qualify for the World Cup. It would have been natural to simply say that he would skip the Italy match. Then when things had calmed down the new national team trainer could have come down and met with Zlatan to discuss things.”

But Hamrén defended bringing up Ibrahimovic’s concerns at the press conference, telling the newspaper that he and Ibrahimovic had come to an agreement that the new coach would “tell it like it is”.