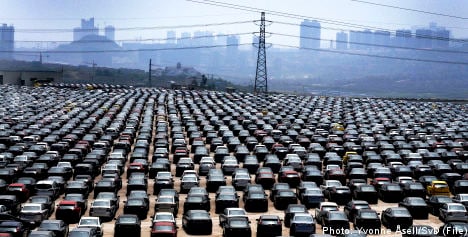 Volvo Cars, based in Sweden and losing money, produced about 400,000 vehicles last year under the ownership of US auto giant Ford, the Wall Street Journal reported on Wednesday.

The report, datelined from Beijing, said that if Geely, currently the preferred bidder, succeeded in taking over the company it intended to boost sales to a million vehicles a year.

It would achieve this partly by building a factory in China to make 300,000 vehicles per year and aimed at the local market, the report said.

Geely also has plans to develop two or three new larger Volvo luxury models in the next three to four years in its bid to boost global sales.

The Chinese automaker reckons Volvo can sell about 200,000 cars a year in China, compared with the 12,600 vehicles sold in China last year.

But a final deal allowing Geely to purchase Volvo from Ford remains a long way off, as the companies continue to grapple with the question of how much technology Ford is prepared to share with Geely, according to the newspaper’s source.

Also unresolved is what rights Ford may have to continue using Volvo’s technology and how the two companies would resolve any future disputes over technology.