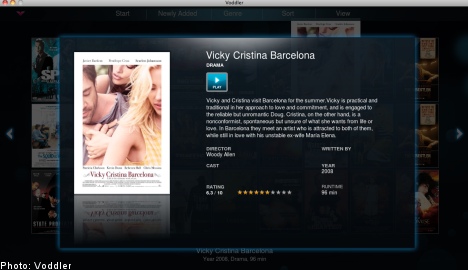 In addition to signing up tens of thousands of subscribers in a matter of days, the company responsible for the service, Voddler, recently inked licensing deals with two major Hollywood studios, Walt Disney Company and Paramount, giving its users access to thousands of film titles.

Founded in Stockholm in 2005, Voddler offers users streaming on-demand videos free of charge. When it released a beta version of its technology in July, the service attracted 16,000 users on the first day.

Voddler launched an updated version of the service in late October, inviting customers of Swedish internet service provider Bredbandsbolaget to sign up.

“The launch was very, very successful, both in terms of how the service has been received in the press and in terms of the response from the public,” Voddler executive vice president Zoran Slavic told The Local.

He said Voddler now has 70,000 registered users, as well as a queue of more than 200,000 people who have requested an invitation to join the service.

Often dubbed the “Spotify for movies”, referring to another Sweden-based service for digital music distribution, Voddler aims to provide a legal alternative to file sharing pirated films that still allows customers the chance to watch whatever they want, whenever they want, for little or no cost.

While Voddler isn’t the only company in Sweden offering streaming movies over the internet, it has one very important difference from its competitor.

“We’re the only service offering movies for free,” said Slavic.

He explained that Voddler believes that file sharing and internet piracy have changed consumer habits to the point that many expect to be able to see movies online without paying for them.

Free online movies are “the way of the future” he said, and that Voddler’s approach helps penny-pinching movie lovers avoid many of the risks associated with downloading pirated films.

“Our customers can be sure that Voddler is totally legal, secure, and that there are no risks of computer viruses infecting their machines from downloaded files,” he said.

While the service is currently only available in Sweden, Voddler plans to expand the service to Norway, Denmark, and Finland in 2010.

“They like Sweden because we have a high internet penetration and a huge number of households equipped with broadband connections,” he said.

He added that while Voddler is certainly looking to bigger markets in other parts of Europe and North America, the company is taking a measured approach to its expansion plans.

“We want to prove the business and the technology before entering bigger markets,” he said.

Voddler is also being cautious about adding titles to its catalogue of currently available films. While the recent deals with Disney and Paramount give the company access to thousands of titles, Slavic said that users currently have access to between 500 and 800.

“It’s important to keep adding new films. We add a few titles every day, instead of just putting everything out all at once,” he said.

While Slavic is happy to have Voddler held up to the much-hyped Spotify, he said that comparisons between the two only go so far.

“There are also differences in how you earn money from the content.”

“People get to see the whole movie without any interruptions,” said Slavic.

Next week Voddler plans to launch a pay-per-view service which will allow users to pay to view premium content, and in January the company will start offering monthly subscriptions.

Voddler also recently launched a version of its service for Mac users, and Slavic said that an iPhone application is in the works.

“We have one but it hasn’t been released yet,” he said, adding that the Voddler iPhone application is expected to be launched sometime next year.